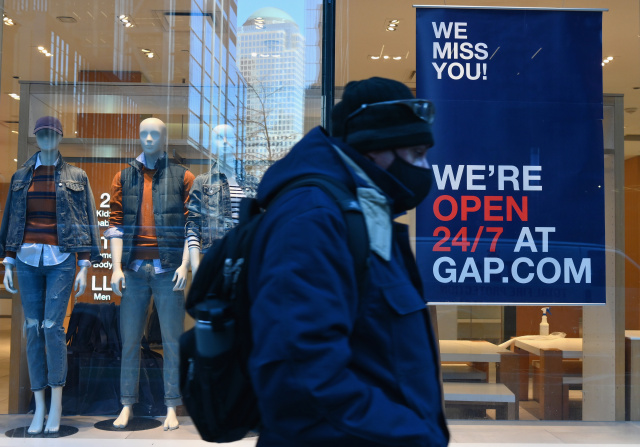 A man walks past a store on January 12, 2021 in New York City. New York City could run out of its Covid-19 vaccine stock "by the end of next week," Mayor Bill de Blasio told journalists Tuesday, calling on the federal government and laboratories to prevent a dearth of doses. (Angela Weiss / AFP)

As the health crisis rages out of control in the US, this was the first time the toll in the country hardest hit by the pandemic surpassed 4,000 in 24 hours.

Around 131,000 people are now hospitalized in the US with Covid-19, said the Covid Tracking Project.

The weekly average of fatalities is at its highest level since the pandemic started, it said.

Faced with these grim numbers and the presence of the new, more contagious Covid variant, authorities announced Tuesday that people wishing to fly to the US must show proof of a negative Covid test prior to departure.

The country, where health restrictions vary drastically between states and compliance can be spotty, is ultimately counting on a massive vaccination campaign begun in mid-December to bring the health crisis to an end.

But the effort is running behind, with just 9.3 million people having received the first of two injections of the two vaccines authorized in America. That is less than 10 percent of the population.

The nation with the world's largest economy has now recorded 22.8 million coronavirus cases and more than 380,000 deaths since the start of the pandemic.