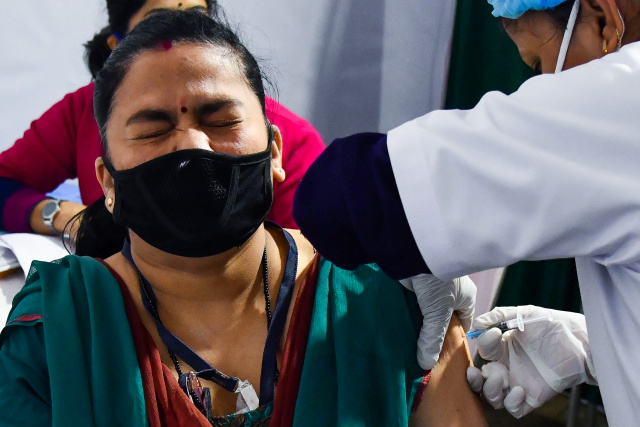 A medical worker inoculates a colleague with a Covid-19 vaccine at a hospital in Guwahati on January 16, 2021. (Biju BORO / AFP)

(AFP) - India kicked off one of the world's largest coronavirus vaccination drives Saturday, as US drugs giant Pfizer moved to calm fears in Europe about delays to deliveries of their vaccine.

The United Nations is intensifying its push to speed up vaccine rollout globally, particularly to poorer countries, as officially recorded virus deaths surge past two million.

"I have seen people dying," said Santa Roy, a health worker who was one of the first to receive a jab in Kolkata, telling AFP he now saw a "ray of hope".

The virus continued to play havoc with the sporting calendar, with 47 players barred from practising for a fortnight ahead of the Australian Open, the first grand slam tournament of the year.

Passengers on two charter flights that brought them to Melbourne tested positive for Covid-19.

"Sorry but this is insane," tweeted French player Alize Cornet, adding: "Soon, half of the players from the AO will actually have to isolate."

India, home to 1.3 billion people, has the world's second-largest number of recorded cases behind the United States.

The government aims to inoculate 300 million people by July with Covishield -- developed by AstraZeneca and made by India's Serum Institute -- or the homegrown Covaxin.

Covaxin is still in clinical trials and recipients had to sign a consent form that stated that the "clinical efficacy... is yet to be established".

But Prime Minister Narendra Modi, launching the immunisation campaign, urged people to reject "propaganda and rumours" about the indigenous vaccine.

The government says it has about 150,000 specially trained staff involved in the rollout and has ramped up security to avoid doses ending up on the black market.

While India pledges huge strides in its rollout, Europe's efforts continued to stutter.

Pfizer tried to allay concern among European Union countries that shipments of its vaccines would slow down during January because of work at its Belgian plant to increase production capacity.

A statement from Pfizer and its German partner BioNTech said the work would allow them to "significantly" scale up production of the vaccines in the second quarter.

Deliveries would be back to the original schedule to the EU from the week of January 25, they pledged.

But there are concerns in hard-hit Europe that the Pfizer delays could further slow a vaccine rollout that has already faced heavy criticism.

Ministers from several Nordic and Baltic countries said in a joint letter that the situation was "unacceptable" and "decreases the credibility of the vaccination process".

And Belgium's vaccination strategy taskforce condemned a lack of consultation by Pfizer over the reduction in deliveries as "incomprehensible".

As cases mount, nations from Italy to Brazil have doubled down on restrictions and many places have tightened travel curbs in a bid to control new strains of the virus emerging in Brazil and South Africa.

France saw a 6.00 pm night-time curfew come into force while Spain said that although it was ruling out another lockdown for now, regions could extend local curfews.

In some countries, resentment is on the rise.

Roughly 10,000 people marched in Austria's capital Vienna against coronavirus restrictions, calling on the government to resign.

"You're the disease. We're the cure," read banners brandished by the protesters, most of whom refused to wear masks.

China, which had all but wiped out the virus, is meanwhile battling a new cluster near Beijing with a series of lockdowns. It extended its isolation period for overseas arrivals on Saturday.

Serbia announced that it had received a million doses of the Chinese-made Sinopharm vaccine, one of the first European countries to do so. And Beijing promised half a million doses to the Philippines.

US President-elect Joe Biden meanwhile will sign executive orders on Inauguration Day next week including one to address the pandemic, a senior aide said.

The US is fast approaching 400,000 dead from Covid-19 and is logging well over a million new cases a week in the world's largest economy.

Biden's administration has pledged to set up thousands of immunisation sites, deploying mobile clinics and expanding the public health workforce.

California has been particularly hard hit in recent weeks, with so many deaths in some parts of the state that funeral homes are running out of capacity.

Boyd Funeral Home in Los Angeles has begun turning away customers for the first time in its history.

"It's sad. But that's pretty much how it is now," said owner Candy Boyd.

"Things are getting more and more out of control."