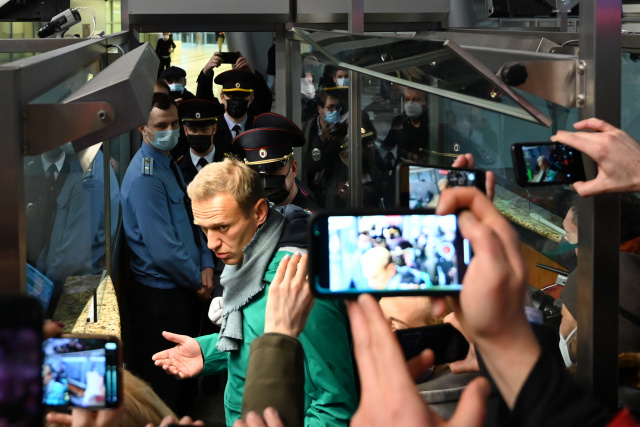 Russian opposition leader Alexei Navalny is seen at the passport control point at Moscow's Sheremetyevo airport on January 17, 2021. Russian police detained Kremlin critic Alexei Navalny at a Moscow airport shortly after he landed on a flight from Berlin, an AFP journalist at the scene said. (Kirill KUDRYAVTSEV / AFP)

(AFP) - Police detained top Kremlin critic Alexei Navalny on Sunday when he flew back to Russia months after barely surviving a poisoning attack, prompting a new wave of Western condemnation.

Navalny was detained at Moscow's Sheremetyevo airport less than an hour after he flew in from Germany, where he had been recovering from the poisoning with a nerve agent he says was ordered by President Vladimir Putin.

The United States, the European Union, several EU governments, Canada and a senior aide to US President-elect Joe Biden immediately called for his release, with some in the EU urging new sanctions against Moscow.

Rights groups joined the calls, with Amnesty International saying Navalny had become a prisoner of conscience and accusing Russian authorities of waging "a relentless campaign" to silence him.

"Mr Navalny should be immediately released, and the perpetrators of the outrageous attack on his life must be held accountable," Biden's national security advisor Jake Sullivan tweeted.

US Secretary of State Mike Pompeo added that America "strongly condemns" the arrest, noting with "grave concern" that Navalny's detention was the latest attempt to silence voices critical of Russia's government.

Russian foreign ministry spokeswoman Maria Zakharova hit back in a Facebook post, telling foreign leaders to "respect international law" and "deal with the problems in your own country".

Navalny, 44, was met by uniformed police at passport control after his Berlin flight touched down in Moscow, according to AFP journalists at the scene.

He embraced his wife Yulia who was travelling with him and was led away, with aides later saying he was being held at police station near the airport.

"Alexei was detained without the reason being explained," Navalny's lawyer Olga Mikhailova told AFP at the airport, saying she had been refused the right to accompany him.

"Everything that is happening now is against the law."

Russia's FSIN prison service said in a statement that it had detained Navalny for "multiple violations" of a 2014 suspended sentence for fraud, adding that "he will be held in custody" until a court ruling.

The FSIN said it had previously warned Navalny he would be arrested for failing to meet probation conditions while in Germany, including that he check in with the service twice a month.

Speaking to journalists at Sheremetyevo before his detention, Navalny said he did not fear being arrested.

"I am not afraid... because I know that I'm in the right, I know that the criminal cases against me are fabricated," Navalny said, standing in front of a picture of the Kremlin in the terminal.

His plane landed at Sheremetyevo after a dramatic last-minute diversion from another Moscow airport, Vnukovo, where several hundred of his supporters and media were waiting.

Several of his associates were taken into custody at the airport while the plane was in the air, including prominent Moscow activist Lyubov Sobol and other top aides.

OVD Info, which monitors detentions at political protests in Russia, said at least 55 people had been detained at the airport, which had banned mass events because of coronavirus restrictions.

Sobol and others later said they were released and were facing administrative charges.

Dozens of police in riot gear with black helmets and batons had deployed at the airport.

"I had to come to support him, to show him that he is not alone," Saint Petersburg artist Tanya Shchukina told AFP.

Navalny fell violently ill on a flight over Siberia in August and was flown to Berlin in an induced coma. Western experts concluded he was poisoned with Soviet-designed nerve toxin Novichok.

The Kremlin denies any involvement and Russian investigators said there were no grounds to launch a probe.

Navalny may now face criminal charges under a probe launched late last year by Russian investigators who say he misappropriated over $4 million worth of donations.

Navalny has been the symbol of Russia's protest movement for a decade, after rising to prominence as an anti-corruption blogger and leading anti-government street rallies.

He publishes YouTube investigations into the wealth of Russia's political elites. Some of the videos garner millions of views, making the activist's team a target of lawsuits, police raids and jail stints.

He came second in a 2013 vote for mayor of Moscow but was barred from standing against Putin in the 2018 presidential elections.

His allies are also frequently prevented from running for election.

His team has been gearing up to challenge the ruling United Russia party in elections to the lower house State Duma due in September.

General » Be a reporter: Write and send your article » Subscribe for news alert
Tags: Russia, Navalny