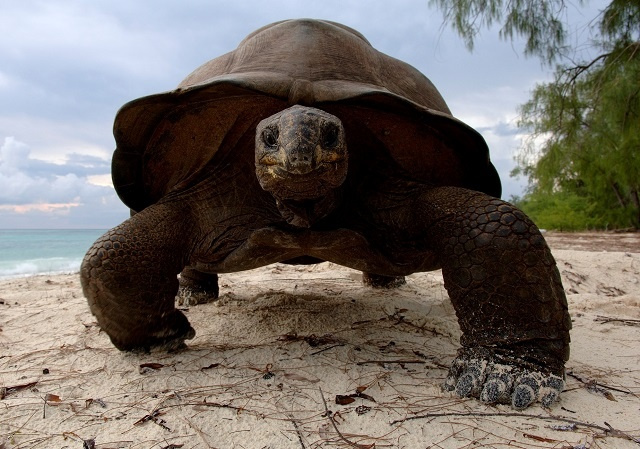 (Seychelles News Agency) - Two giant Aldabra tortoises living in a zoo in the north of France are being repatriated to their native Seychelles, said an official from the Environment Ministry.

The director for Biodiversity Conservation confirmed to SNA that the ministry has been in contact with an international organization since February last year.

“An organisation called REWILD contacted the ministry in 2020 regarding the translocation of two Aldabra tortoises from France and enquired about the different administrative procedures in place to facilitate this process, as well as the sanitary prerequisites to relocate those two tortoises to Seychelles,” explained Ashley Dias.

According to Dias, “REWILD recently purchased a zoo in the north of France to transform it into a rescue centre to tackle the management of seized or wildlife in captivity away from their country of origin with one single objective, their return in an environment as close as possible to their biological requirements, in latitudes more likely to meet the original climatic conditions. With this in mind, we would like to offer this opportunity to two Aldabra males from Seychelles.”

REWILD is an organisation created by seven founding associations specialising in the defence, safeguard, seizure, care and rehabilitation of wild animals victims of trade as well as in the conservation and protection of wild animals and their natural habitats.

According to the CITES (Convention on International Trade in Endangered Species) permit the two tortoises endemic to Seychelles’ Aldabra Atoll – a UNESCO World Heritage Site - were born in 1957. In 2010 they were exported to licensed breeders in Italy. It is not clear how the tortoises ended up in a zoo in France.

The director added that Seychelles’ National Biosecurity Agency has accepted the repatriation of the tortoises and is satisfied with the health certificate provided by the organisation. “Both tortoises are healthy and have been tested for any diseases,” added Dias.

Given the COVID-19 pandemic and related travel restrictions, it is not clear when the tortoises will arrive home, but all their travel expenses will be covered by REWILD. A team from the organisation is also expected on the island nation to film their arrival.

Once in Seychelles - 115 islands in the western Indian Ocean – the tortoises will be kept in quarantine in a designed area at the Botanical Gardens. The chief executive officer of the National Botanical Gardens Foundation told SNA that this period of quarantine is very important.

“Not only in terms of watching out for diseases but most importantly in terms of their adaptation to the food and their new habitat,” said Raymond Brioche. The Ministry of Environment will then decide on the best options to rehabilitate both tortoises in the wild.

Antonio Constance, better known as Mazaren, a conservationist and a lover of the giant land tortoises which he studied when he worked on Aldabra has welcomed the news and said that Seychelles’ land tortoises “belong and should remain where they were meant to be, their islands.”