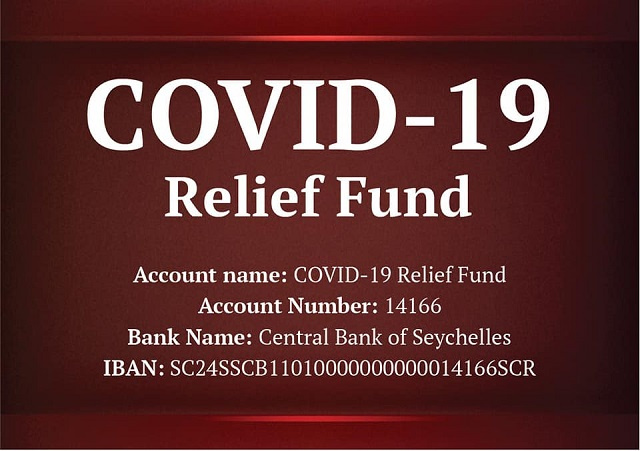 (Seychelles News Agency) - In a show of solidarity against COVID-19, eight Seychellois businesses and foundations donated $705,000 on Tuesday for the island nation's COVID-19 relief fund and vaccination programme, including a donation from the  JJ Spirit Foundation that accounted for over half of the total.

All money collected go towards the COVID-19 relief fund, a fund set-up by the president earlier this year to finance the vaccination programme of the island nation’s population that started on January 10.

The largest contribution on Tuesday was made by the JJ Spirit Foundation, amounting to a little over $472,000 (SCR10 million).

“The foundation has realised that the state that we are in at the moment. We just sold Espace building and hence have a sum of money, and this is a good coincidence because it places us in a position to make a substantial contribution to the COVID relief fund,” said Fred Arrisol, the treasurer of the foundation.

Another contributor, the Seychelles Breweries, donated over $47,000 (SCR1 million). The company’s managing director, Conor Neiland, said that “given the circumstances and the cases that have been appearing on the islands, now is the right time to make a further contribution to the efforts against COVID.”

Last year, when Seychelles – 115 islands in the western Indian Ocean - was seeing its first imported cases, Seychelles Breweries made donations of sanitisers and thermometers to the Ministry of Health.

Two representatives of the Joseph Albert Family Foundation, which brings together family-owned businesses such as UCPS, Cat Coco and Creole Travel Services, also presented their cheque of $47,000 (SCR1 million) to the president.

Guillaume Albert, the chief executive of Creole Travel Services, said that “even though 2020 was a difficult year for all our companies, we are very happy to have been able to put together this cheque toward the vaccination campaign to ensure the process goes faster.”

His brother Gregory Albert, the chief executive of UCPS, added that the sooner the country can get the majority of its population vaccinated, the sooner the island nation “can get back to a semi-normal, which will most importantly keep the economy alive.”

Tickmill, an offshore company, represented by its local director Beryl Francoise, donated $10,000. “The company saw that, even if we are an offshore company, it is not just a matter of having a license in Seychelles, making a profit and moving our money out of the country. This is a chance for us to give back to the community,” said Francoise.

The donations follow several others made to the fund during last week. Last Saturday, another substantial donation was made by local company Land Marine, whose donation amounted to $700,000.

“It is important that we stand by our population and the sooner we get ourselves in order against Covid and we get the country to reopen, it will be to the benefit of not only the businesses but for every Seychellois,” said Hughes Adam the company’s managing director.

The Chinese embassy and two local businesses also donated S77, 000 to the fund last week. "I am convinced that with solidarity and disciplined we are going to surmount the difficulties. The frontier is going to open for tourism and this is going to contribute greatly towards our economy," said the Chinese Ambassador to Seychelles, Guo Wei.

Also last week the Praslin Business Association, as well as residents of the second most populated island of Praslin donated cleaning supplies and equipment including a washing machine to the island’s hospital.

President Ramkalawan announced the creation of the fund on January 10, when $1.8 million was donated. Private donors and citizens wishing to make their contributions towards the vaccination campaign can donate to account number 14166 of the Central Bank Seychelles (CBS).

Finance » Be a reporter: Write and send your article » Subscribe for news alert