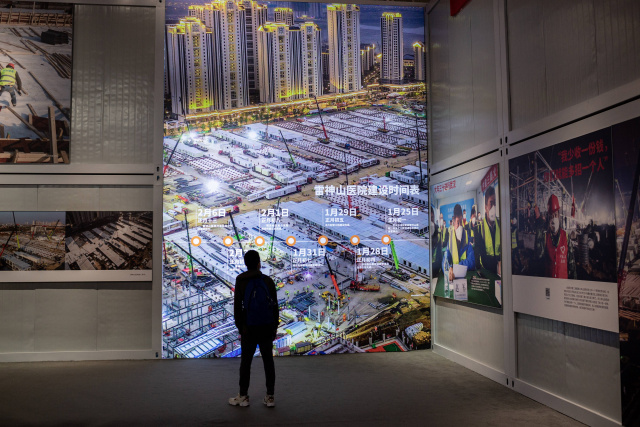 In this picture taken on January 15, 2021, a man looks at a picture of the hospital built in Wuhan during the outbreak, on display at an exhibition about China’s fight against the COVID-19 coronavirus at a convention centre that was previously used as a makeshift hospital for patients in Wuhan. January 23 marks one year since the start of a 76-day lockdown of Wuhan, the central Chinese city where the coronavirus was first detected before sweeping across the world and killing more than two million people. (NICOLAS ASFOURI / AFP)

(AFP) - "People Supremacy, Life Supremacy" reads the sign at a Wuhan exhibition, where visitors are greeted by a paean to China's triumph over the pandemic and the agility of its communist leadership in a crisis.

Saturday marks one year since the start of a 76-day lockdown of Wuhan, the central Chinese city where the coronavirus was first detected before sweeping across the world and killing more than two million people.

With China's official death toll from the virus under 5,000, Beijing is on a prolonged victory lap to promote its narrative of how it contained Covid-19, engineered vaccines and rebooted its economy.

China this week reported 2.3 percent GDP growth in 2020 - the slowest in decades but still the only major economy to post positive figures during the pandemic.

As the official data was released, state media trumpeted the "resilience and vitality" of China's economy.

In Wuhan, a city of 11 million people, scenes of relaxation, travel freedoms and safety this week contrast with the rolling lockdowns, surging death rates and overwhelmed health services in many other parts of the world.

At the Wuhan exhibition hall, China's virus story gets an extravagant retelling.

Visitors are transported back to early last year, when tributes flowed to the medics, army and authorities who were battling the virus at its ground zero.

Rooms are bedecked in communist flags and party messages as videos celebrate health workers and the makeshift hospitals erected in record time.

President Xi Jinping presides benevolently over the hall from life-sized photos, unmistakably the marshall of the virus response.

Many in Wuhan stick closely to the official story, especially with a team of experts from the World Health Organization poised to begin fieldwork to establish the virus' origins.

"Wuhan had a tough year in 2020," Wang Chen, a 20-year-old resident, told AFP outside the exhibition, adding that China "handled the crisis very well."

Stung by international criticism of cover-ups and bungling in the early weeks of the outbreak, China for months blocked the WHO team from visiting.

Beijing is embracing their much-delayed trip as a chance to embellish its storyline.

"It's time to prove Wuhan's innocence," Wang said, in echoes of official narratives that have sought to lay the blame for the virus in other countries.

Outside China, the view on Beijing's virus response is less glowing.

In October last year, a study by the Pew Research Center found western views of China soured during the Covid-19 pandemic.

Among the most critical were Americans, whose outgoing President Donald Trump started the virus blame game, calling Covid-19 the "China Virus".

Criticism was echoed by Australia and Europe, and questions over China's lack of transparency remain unanswered.

China has in turn sought to punish Australia for its efforts to fast-track an inquiry into the origins of the virus.

On Tuesday, a panel of independent experts said both China and the WHO could have done more to avert the catastrophe which followed.

"There was potential for early signs to have been acted on more rapidly," the Independent Panel for Pandemic Preparedness and Response said.

Unable to convince its critics in the Western world, China has reached out to poorer allies from Southeast Asia to Africa, promising to share vaccines at a reasonable price.

Inside China, the communist leadership has been busy lacquering its version of events for domestic consumption.

In September, Xi presented medals to pandemic health workers, hailing China's passing of an "extraordinary and historic test" as much of the world remained mired in high infection rates.

Whistleblowers who were silenced as the outbreak unfurled in Wuhan have been rebranded as patriots, as the communist leadership lionises a national effort to squash the virus.

On Friday, a state-sponsored documentary "Days and Nights in Wuhan" is due to hit cinemas, with hundreds of free screenings planned across the country.

The film is directed by Cai Jinling, whose online CV says she worked in the Beijing Public Security Bureau for nearly a decade.

A review published on the film’s official page on Chinese social media platform Weibo reassures viewers that it skirts over the death and panic of those first chaotic few weeks of the crisis.

"Instead (it) creates the impression of coping ... through the power of love," the review said.