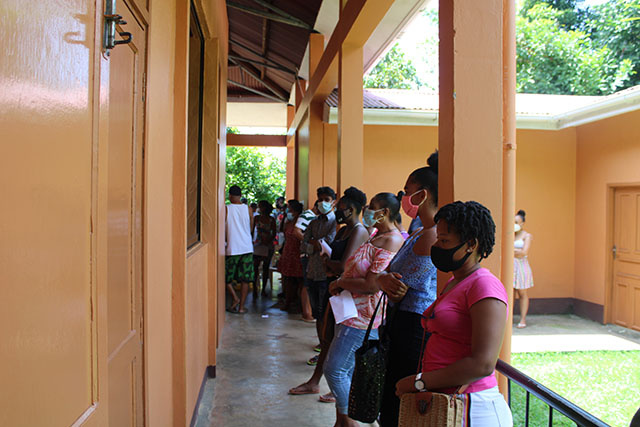 Most frontline medical and essential workers in Seychelles have received the COVID-19 vaccine and efforts will now move to tourism employees, said a top official.

Two new vaccination centres opened on the main island of Mahe on Tuesday to allow people from the tourism industry to get their jabs. By next week the vaccination campaign will be opened to the general population.

As of Wednesday, over 12,000 vaccinations were administered on the island nation in a campaign launched on January 10, by the head of state Wavel Ramkalawan who was first to take the vaccine.

The programme manager of the Public Health Authority, Juliette Henderson, told SNA that the aim "today is to vaccinate as many people working at the frontline so that we can move on with the programme to the wider population."

"In terms of numbers, we aim to vaccinate around 70 percent of the population. Most people working in government essential places have been vaccinated. Today we expect people working directly in the tourism-related field such as those in hotels," explained Henderson.

The vaccinations are taking place at different centres on the three most populated islands of Seychelles -- Mahe, Praslin, and La Digue.

SNA stopped at one of the centres in the district of Beau Vallon, on the northern side of the main island to get the views of those taking the vaccine.

Elda Loze, 28, said that from day one when she heard about the possibility of a vaccine and after hearing the death of many people around the world, she wanted to take it.

Twenty minutes after taking the vaccine, Loze said that she felt "perfectly fine and will be waiting to take the next dose until becoming fully immunized."

Richard Samson, 45, said "by taking the vaccine, we are declaring war on the virus by bringing its spread to an end. There are rumours that the vaccine is not good or not properly tested, but I have taken mine today, and I am still standing. I hope a majority of people get their jab."

A nurse, Jeanne Esparon, who was helping with the registration of people taking the vaccine said that "it is almost 10 a.m. and we have received a good turnout of about 100 people."

Esparon, who has taken the vaccine herself, said that this is showing that people are understanding the need to take the vaccine to protect themselves from the virus.

"The way things are going, we are expecting more people to come during the day for their doses. We hope that the majority of people come to take it," said Esparon.

The only constraint is that people are coming all together at once to take the vaccine and they have to wait in the line for quite a while, Esparon added: "that random people outside of our list are also coming to take the vaccine."

According to the manager for the Extended Programme for Immunisation, Florida Bijoux, as of Saturday around 6,000 people, largely those in the essential services, had been vaccinated.

The vaccination roll-out in Seychelles started nine days ago making the island nation’ the first country in Africa to roll out its campaign. During the ceremony, president Ramkalawan announced that the United Arabs Emirates will be donating a further 20,000 vaccines on top of the 50,000 already given, albeit of a different brand. This batch of vaccines will be used for Seychellois over the age of 60.

India is also pitching in to help the Seychelles – 115 islands in the western Indian Ocean - with a donation of 50,000 Oxford AstraZeneca vaccines which will arrive in the country towards the end of January or early February.

According to the latest statistics from the Ministry of Health, 746 cases of COVID-19 were recorded in the country, amongst which 181 are active cases. There have been two deaths to date and 563 people have since recovered from COVID-19.