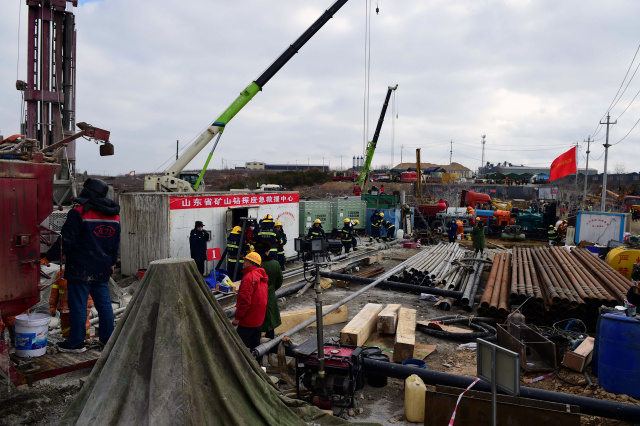 This photo taken on January 20, 2021 shows members of a rescue team working at the site of a gold mine explosion where 22 miners are trapped underground in Qixia, in eastern China's Shandong province. (STR / AFP / CNS)

(AFP) - A miner trapped underground in east China has been confirmed dead after 10 days, state media reported, as rescuers continue efforts to save twenty-one others stranded in rising floodwaters.

Twenty-two workers were stuck hundreds of metres underground at the Hushan mine near Qixia city in east China's Shandong province when an explosion on January 10 sealed the entrance and cut off communications.

Contact was made on Sunday with 11 miners at one location around 580 metres (1,900 feet) below the surface. Another -- apparently alone -- is trapped about a further 100 metres down.

After days without any sign of life, a handwritten note was sent up on a metal wire that rescuers had dropped into the mine on Sunday.

In it, the workers pleaded for food and medicine and warned water levels were high in the damaged mine.

The whereabouts and condition of 10 of their colleagues are still unknown.

One miner in the group of 11 who sustained a head injury in the blast was confirmed to have "no signs of life" on Wednesday over a phone line that had been lowered into the shaft, state broadcaster CCTV reported.

Eight of the miners in the group are in stable condition, while two are "feeling weak," CCTV said.

Eight more shafts are at various stages of drilling, two of which are intended to drain the rising floodwaters in the mine, CCTV reported Wednesday.

One completed communications shaft has now been abandoned since it worsened water leakage into the section of the mine where 11 workers are currently stuck, according to CCTV.

The deepest section of the mine, where one person is believed to be trapped, is also experiencing "serious flooding".

There are plans for the widest of the shafts, about the size of a manhole cover, to be broadened enough to extract the miners once drilling is finished, CCTV said Wednesday.

Rescuers are planning to drill other channels to send down probes to find the 10 other workers who are incommunicado.

Footage by CCTV showed several large cranes, lorries and construction equipment perched on a bare cliffside at the scene of the rescue operations Wednesday.

The progress of the rescue has been slow because they are drilling through granite, according to Chen Fei, a top city official, and the extraction could be further complicated by the water-logged state of the mine.

Overnight temperatures in Qixia are set to drop below freezing during the next week.

But some in the group have recovered strength after supplies reached them, rescuers have said.

Several waterproof back-up phones were sent down to the trapped miners after they wrote a second note Tuesday morning saying earlier phones were damaged, the official Xinhua news agency reported.

Rescue teams initially lost precious time as it took more than a day for the accident to be reported, China Youth Daily reported, citing provincial authorities.

Both the local Communist Party secretary and the mayor have been sacked over the 30-hour delay and an official investigation is under way to determine the cause of the explosion.

Mining accidents are common in China, where the industry has a poor safety record and regulations are often weakly enforced.

In December, 23 workers died after being stuck underground in the southwestern city of Chongqing.

General » Be a reporter: Write and send your article » Subscribe for news alert
Tags: China, mining