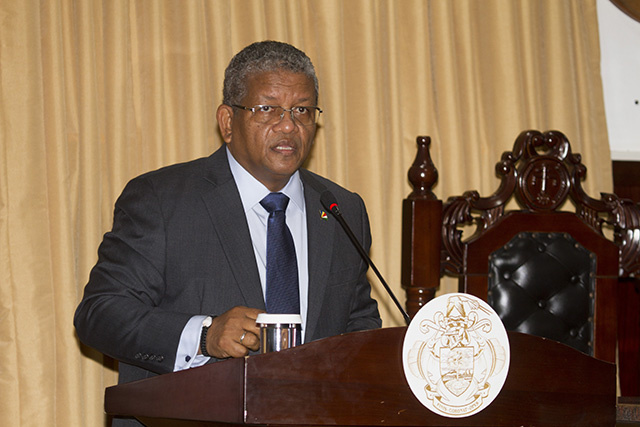 The President said that with all that is happening and citizens doing their small bit, Seychelles will see victory against COVID-19. (Rassin Vannier, Seychelles News Agency)

In his first State of the Nation address, Seychelles President Wavel Ramkalawan said Friday he sees the island nation overcoming the setbacks of COVID-19, more jobs for Seychellois and signalled big changes could be coming for Air Seychelles.

The President addressed the National Assembly 89 days after he assumed the presidency on October 25.

Ramkalawan started his address by observing a minute of silence for the three Seychellois who died of COVID-19. The head of state also thanked all the health professionals fighting the pandemic.

“After we have started the vaccination campaign, today I want to say that this small Seychelles, small that we are, have reached number two in the world in giving vaccinations to our population. Today after Israel we are number two, and with the programme soon Seychelles will be first,” said the head of state.

The President said that with all that is happening and citizens doing their small bit, Seychelles will see victory against COVID-19.

The issue of an effective public service was a point raised by the head of state, adding that there is an ongoing exercise to transform the Department of Public Administration. Ramkalawan added that there will be a new policy for Gainful Occupation Permit (GOP) which will allow more employment opportunities for locals.

Ramkalawan said that there were too many foreigners working in Seychelles and that the number has a direct impact on the economy as they are paid in forex which is taken from the country.

The president stressed that  Unemployment Relief Scheme (URS) should remain a temporary scheme and all efforts will be made by the Ministry of Employment and the Agency for Social Protection to ensure that those on the scheme find permanent jobs.

Ramkalawan said that upon assuming office he has seen many wastages, which he wants to cut down. He announced that some government parastatals will close down and said that this will also apply to some governing boards as currently there are 108 such boards in the country.

The president said his government will relook and take a decision vis a vis the national courier which currently owe $37 million in loans. Ramkalawan explained that the government cannot sustain Air Seychelles and perhaps it is best for the company to look at only at domestic and ground handling services.

“The government will not tolerate corruption in the public sector,” said the president. Ramkalawan added that the government will dismiss the board of directors for the Anti-Corruption Commission of Seychelles and use to funds to employ additional staff for investigators.

“We will reinforce the anti-corruption commission. The board which is currently receiving SR1.8 million ($85,000) will be dissolved we will bring the amendment to the law asking for the removal of the board which will be replaced by a structure to be announced,” said Ramkalawan.

The president said with new investigators, seven in total, he expects to see results for if that does not happen, he will announce the closing of the commission in his 2022 State of the Nation address.

The president of Seychelles – 115 islands in the western Indian Ocean – also announced the abolishment of the Financial Assistance for Job Retention (FA4JR) as of April.

The FA4JR scheme was introduced in April to support businesses to maintain their workforce during the economic recession caused by the Covid-19 pandemic. Since its introduction, the highest number of applications were received in May, when the scheme still applied to non-Seychellois employees. In July, the scheme was revised to only apply to Seychellois employees and self-employed individuals.

Ramkalawan once again appealed to drug traffickers to stop what they are doing, which he says is killing the youth of Seychelles. The president said that he is starting a war full of arsenals and without pity on the island nation’s drug traffickers.

The National Assembly will resume sitting next week when the Leader of Government Business, the Leader of the Opposition and other members will give their responses to the 2021 SONA.