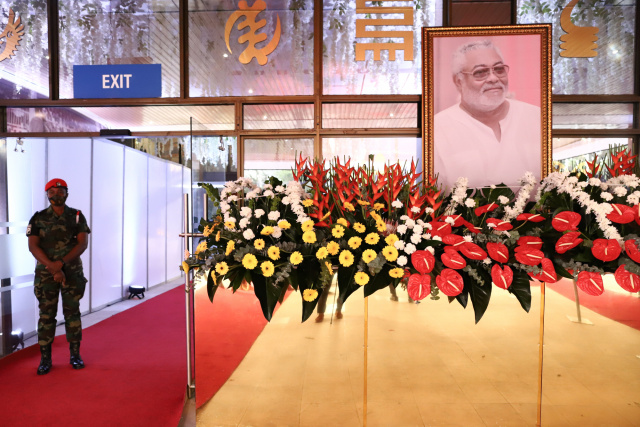 A photograph of the late former Ghana President Jerry John Rawlings displayed during the laying in state at the Accra International Conference center, on January 25, 2021. Former Ghana President Jerry John Rawlings died in November 2020 at the age of 73 and his funeral was initially scheduled for December 23, 2020 but was postponed, due to what the foreign ministry called "unforeseen circumstances". (Nipah Dennis / AFP)

(AFP) - As Ghana prepares for the funeral of former president Jerry Rawlings, the two main political parties are squabbling over his legacy.

He died in November at the age of 73 and his funeral was initially scheduled for December 23 but was postponed, because of what the foreign ministry called "unforeseen circumstances".

It will now take place in the capital Accra on Wednesday.

Behind the scenes, Rawlings' family, traditional chiefs and political figures have been at odds over the legacy of the former air force flight lieutenant, who twice overthrew governments but was widely seen by the poor as their champion.

Rawlings got his first taste of power in 1979 when he banded together with other junior officers frustrated over widespread corruption to take control.

He quickly handed the reins to an elected president but was soon back at the top following another coup on December 31, 1981.

The son of a Scottish father and Ghanaian mother, he became a national icon as he headed Ghana for 20 years until 2001, being voted in as president at the ballot box in 1992 and ushering in democracy.

Starting out as a populist inspired by the left-wing policies of the Soviet Union and Cuba, he eventually turned to free-market economics to boost Ghana's suffering economy.

He eventually became a major figure in West Africa and also a symbol of pan-Africanism.

Days ahead of the funeral ceremony, which will be held in Independence Square, symbol of Ghana's victory over colonial Britain, the square and adjacent avenue were already swarming with soldiers.

"They're afraid there's going to be trouble," said Esther Amoo, a local business owner, as she stood watching the troops train for the ceremony.

"Everyone wants to get their hands on our former president. Since JJ died, it's a mess everywhere!" she added.

After Rawlings died on November 12 the organisation of the funeral became a highly coveted political trophy, even as the country was in full presidential election swing.

His status as former head of state gives him the right to a state funeral, but the National Democratic Congress (NDC), a party he founded and which has now gone into opposition, demanded that it be involved in organising it.

One party leader even threatened to “steal his remains” following the funeral so that the party could bury him again.

This is despite the fact that Rawlings made a very public split from the NDC in 2009, calling party elders "old evil dwarfs".

Rawlings even helped current President Nana Akufo-Addo win the office for the first time in 2016.

"This whole story of political affiliation is a big joke," said Emmanuel Gyimah-Boadi, co-founder of the Afrobarometer think-tank.

"Jerry Rawlings was deeply democratic-sceptical and never missed an opportunity to express his dislike for multiparty democracy, he added.

"For him, it was an invention of the West that did not suit Africa. It is therefore absurd that our current parties today claim it!"

Ghana today is often considered a beacon of stability in a turbulent region.

Rawlings' record includes 300 documented extra-judicial executions. Up to his death he refused to offer any apologies or reparations to the families of his victims.

"His line of defence was to say that some people deserved it, or even that 'you can't make an omelette without breaking eggs'," said Gyimah-Boadi.

"For me, this is the darkest aspect of his legacy: the legacy of impunity."

Africa » Be a reporter: Write and send your article » Subscribe for news alert
Tags: Ghana, Rawlings