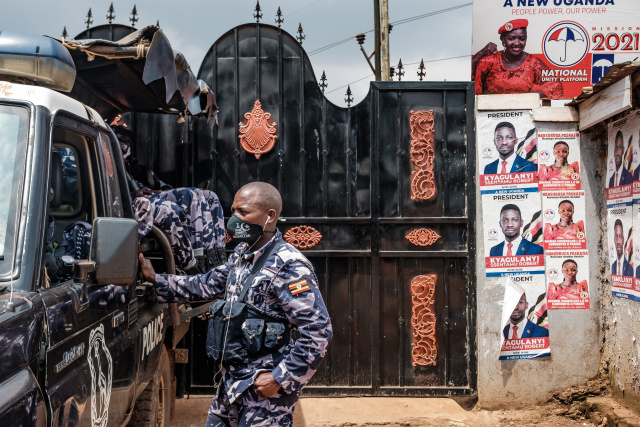 GA patrol car of the Ugandan police is seen stationed outside the headquarters of the Uganda oppposition party National Unity Platform (NUP) on January 20, 2021. Uganda's government spokesman on Tuesday accused the US ambassador of breaching diplomatic norms and engaging in "mischief" over her attempt to visit opposition leader Bobi Wine, who is confined to his home.
The former popstar-turned-politician has been under effective house arrest guarded by soldiers and police, since he cast his ballot in last Thursday's presidential election, which he said was riddled with fraud. (SUMY SADURNI / AFP)

Wine, whose real name is Robert Kyagulani, has been under de-facto house arrest at his home outside the capital, Kampala, since he returned from voting on January 14.

Heavily armed soldiers and police officers surrounding the property have blocked members of Wine's household, including his wife, Barbie, from leaving their compound.

Last week the US ambassador to Uganda was also blocked from visiting the popstar-turned-politician, who won 35 percent of the vote according to official figures.

Sitting at the court's Civil Division in Kampala, Justice Michael Elubu ruled in favour of a petition lodged by Wine's lawyers asking for his release.

"The continued indefinite restriction and confinement of the applicant to his home is unlawful and his right to liberty has been infringed," Elubu said.

"Having found that the restrictions are unlawful it is hereby ordered that they are lifted."

The Ugandan government had argued that the restrictions on Wine's movements were "preventative" measures for his own protection and to prevent protests against the election result, which Wine claims was rigged in favour of President Yoweri Museveni.

Security forces are yet to vacate the area around Wine's home according to Abdu Hakim, an aide to Wine.

Ugandan security forces have in the past disregarded court orders to release individuals or have immediately re-arrested people freed by the courts.

"Several hours later, the military still surrounds my home, blocking access to all! Perhaps (as always) waiting for Gen. Museveni's orders on the next course of action."

Africa » Be a reporter: Write and send your article » Subscribe for news alert
Tags: Uganda, politics