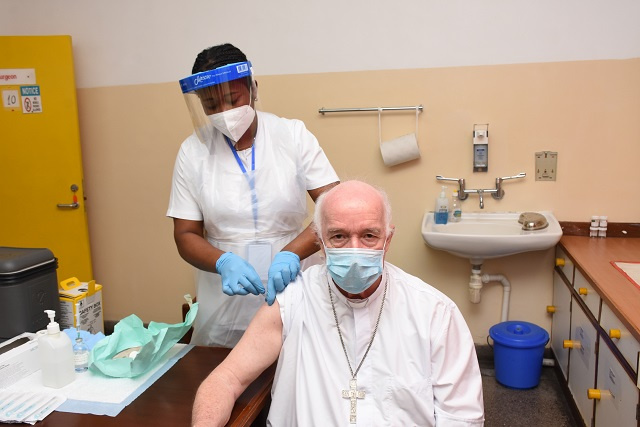 Covishield, as the vaccine is also known as, was given to the country's leaders on Tuesday and will then be administered to health workers as well as to people who due to medical conditions could not take the Sinnopharm. (Seychelles Nation)

(Seychelles News Agency) - Seychelles' health authority has started its second phase of the COVID-19 vaccination campaign by administering the Oxford AstraZeneca vaccine from India to people 60 years and above.

Covishield, as the vaccine is also known as, was given to the country's leaders on Tuesday and will then be administered to health workers as well as to people who due to medical conditions could not take the SInnopharm vaccine.

Peggy Vidot – the Minister for Health – was amongst the first to take the vaccine on Tuesday, followed by other cabinet ministers, as well as political and church leaders.

Vidot told SNA that the vaccination campaign in Seychelles is going very well and surpassing their expectations.

Some 25,000 people are expected to receive the 50,000 doses of Covishield – a donation from the government of India, which arrived in the country last Friday. The Oxford-AstraZeneca vaccine was developed by Oxford University and AstraZeneca, its manufacturer.

The minister for health confirmed that the Sinnopharm and the Covishield will be the two vaccines that will be used in Seychelles – 115 islands in the western Indian Ocean – against COVID – 19.

"We think that for now, we will remain with the two vaccines as you can see in the world there are not a lot of vaccines in the world.  All countries are trying to get it. We were supposed to get some Moderna ones but there are some problems to sell these outside big organisations and countries asking. If we are asking for 100,000 doses, others are looking for millions, so it is not easy for us to buy," explained Vidot.

Vidot added there is the possibility for the island nation to buy additional doses of Sinnopharm and Covishield to cover the rest of the population -- approximately 25,000 people. The additional doses – amongst which is another batch of Sinnopharm expected in the country anytime - will ensure that the country achieves its goal of immunising 70 percent of its population.

To date, 28 percent of the country's population has received their first doses against the virus. As of today, vaccinations will be rolling per districts targeting the elderly population.

The manager for the Extended Programme for Immunisation, Florida Bijoux, told SNA that each day vaccination will be administered in a new district, adding that the ministry will be giving 24 hours' notice of the programme and these will be administered in the already designated vaccinations centres. "We have a team on Praslin, who after administering the vaccines will move to La Digue,' explained Bijoux, refereeing to the two other most populated islands.

Whilst the adult population are being vaccinated, a lot of concerns still remain around immunizing the under-18 population.

"With regards to vaccination for children, there are trials being done with all these vaccines to see their efficiency with the younger ones. The only reason this cannot be done is became the trials are still running and we are still waiting for all information. It is not that these cannot be administered to kids but we have to wait for the information," explained  Public Health Commissioner Jude Gedeon.

He added that globally it is adults who are severely affected by COVID–19 with very few children getting seriously ill or dying from the virus.

Gedeon is urging all those who have not made up their minds to take advantage of the free vaccinations as he added some airlines and countries have already put up the vaccination as a must for travelling.