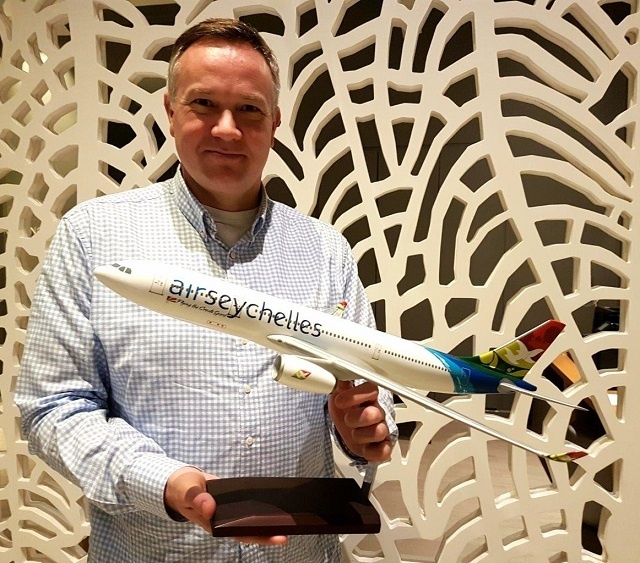 Althuis said Air Seychelles was producing above its budget during the first two months of 2020, before Seychelles and the world was affected by the COVID-19 pandemic. (Air Seychelles)

(Seychelles News Agency) - President Wavel Ramkalawan's suggestion to restructure Air Seychelles in his State of the Nation Address is an opportunity to analyse and review what the options are for the national carrier, said the airline's chief executive.

During his State of the Nation Address last Friday, Ramkalawan said the government cannot sustain Air Seychelles and perhaps it is best for the company to look at domestic and ground handling services only.

"Air Seychelles remains a big problem for our country. Air Seychelles owes more than SCR800 million ($38 million) in debts and today the company cannot sustain itself and in the budget coming before you (the National Assembly), Air Seychelles is asking for another SCR 109 million ($5 million) just to pay the salary of its staff," said the president.

Remco Althuis outlined in a recent interview to Seychelles Broadcasting Corporation (SBC) television that the debt is clearly a problem and it needs to be dealt with.

"The debt falls in two categories - one is the debt to Etihad, which is being renegotiated, and the second piece of the debt is with the bondholders, which is debt that was taken on five years ago to fund the loss-making long-haul operations to Paris, Hong Kong and other European cities," he said.

During negotiations with Etihad, Air Seychelles has been able to obtain a discount of $61 million on its debt, however, discussions with bondholders are ongoing.

The chief executive added that during the first two months of 2020, before Seychelles and the world was affected by the COVID-19 pandemic "the company was actually producing well above the budget because it was beating the budget by about $500,000 for both of those months."

This was made possible following transformations the company made in 2018, when it stopped its long-haul operations and concentrated on operating within the region.

"The COVID pandemic, along with the impact on tourism and aviation, has impacted the timeline of the growing success of Air Seychelles going forward. I believe that the fundamentals are there because all the work that we had to do to achieve these fundamentals have been done in 2018 and 2019 and to an extent in 2020," said Althuis.

In their responses to the President’s State of the Nation address earlier this week, both leaders in the National Assembly spoke about Air Seychelles.

The Leader of the Opposition, Sebastien Pillay, said that the airline must have the chance to explain its debts and how far negotiation is while the Leader of Government Business, Bernard Georges said that the subject is a complicated one. George however echoed the fact that the National assembly must have the chance to listen to all partners and make an in-depth debate on the subject.

"Prior to COVID and in line with its five-year transformation plan, Air Seychelles was actually generating cash on the operations. Had 2020 been a normal year, the company would have beaten the transformation plan by two years. The initiatives that were taken, especially the economics of the Airbus 320 Neos have tremendously changed the dynamics of the company," said Althuis.

On the possibility of the bondholders taking legal action against the airline, Althuis said that he believes "they are using that to eventually put pressure on the negotiation."

He said there was an offer on the table to pay back $20 million out of the total $70 million, which the bondholders have rejected, so Air Seychelles have to see what the next steps will be.

"With such a loan come contracts - big documents of hundreds of pages. Obviously, there is also a route each party can take if there is disagreement and so it is not easy. With these things, it is likely to take years to go the legal route as we are talking about various jurisdictions," said Althuis.

On the subject of Air Seychelles' potentially declaring bankrupt, he said that "bankruptcy or going into the route of a controlled administration, whereby the local company and bankruptcy laws provide opportunities to any company in trouble, that is clearly a route that we could take overall."