Age 112! Seychelles' oldest citizen celebrates another year around the sun 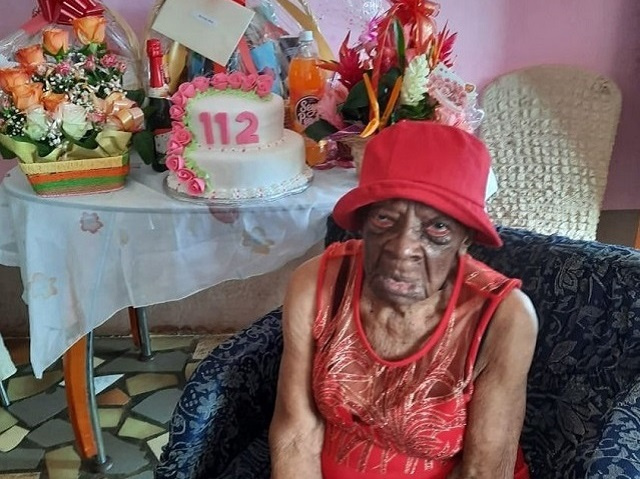 Marie is the oldest-ever citizen of the island nation and tops a list of 11 Seychellois centenarians. (Seychelles Nation)

It was an intimate affair for supercentenarian Nancy Marie, who celebrated her 112th birthday on Tuesday.
With COVID-19 present on the island nation, Marie's celebration of her grand birthday was spent quietly at home with her immediate family but with wishes from all over the country.
Marie, who was born on the archipelago's second-largest island of Praslin in 1909, is the oldest-ever citizen of the island nation and tops a list of 11 Seychellois centenarians.
Marie, who credits her longevity to hard work, no alcohol and cigarettes and to eating the root crop cassava, now lives a stress-free life surrounded by loved ones.
SNA spoke to Marie's daughter Annie on Wednesday who said that her mother is enjoying her days, is healthy except for aches associated with old age.
"She is not fussy or a moody person. She eats well and amongst her favourite food is the bacon," said her daughter, adding that Marie also enjoys some creole dishes, especially the murunga cooked in a broth and known locally as 'bouyon bred'.
Marie spends her days in the living room, chatting away and singing away with the little ones, who she is lucky to have as daily companions.
"She knew it was her birthday and we told her that this year we will not have visitors as there is illness outside. She understands everything," said Annie.
Marie, who lives at Ma Joie, a sub-district in the English River district, had four children, two of whom are still alive.
According to her daughter, Marie was once gravely ill and nearly died. "When she gave birth to my brother, she almost died and her condition was grave. The priest came to give her the anointing of the sick, but she was lucky as she is still here."
As a young woman, Marie worked in a factory on Praslin that made coconut oil from the coconut plantations which were abundant on the islands in those days. After moving to the main island of Mahe, Marie took up work as a housemaid.
Up until a few years ago, Marie still enjoyed cooking and also attended church. Marie is not the first in her family to reach 100 years; her mother Elizabelle Marie was 103 years when she died.
Currently, there are 11 centenarians in Seychelles – 115 islands in the western Indian Ocean, including 10 women and one man. The second and third person on the list is Mrs. Wilfried Pouponneau who will be 108 on August 15 and Alda Philo who will be 106 on July 14.
General » Be a reporter: Write and send your article » Subscribe for news alert
Tags: COVID-19, Nancy Marie, supercentenarian