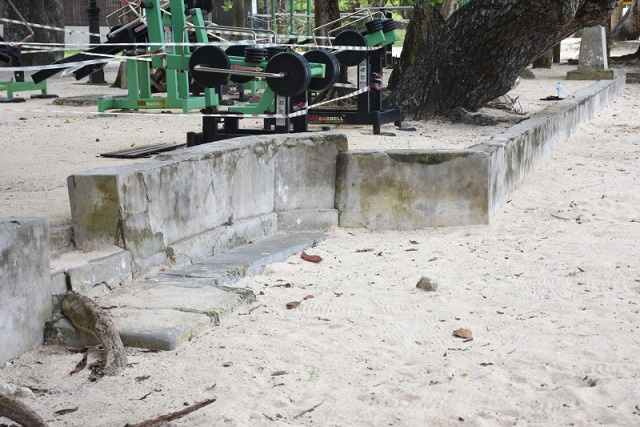 Phase one will include the continuation of the sea wall on Beau Vallon beach from the open gym near the Savoy hotel to La Plage restaurant. (Seychelles Nation)

(Seychelles News Agency) - Officials in Seychelles are taking advantage of the abnormally empty beaches to start a coastal rehabilitation project at Beau Vallon.

The island nation's Ministry of Agriculture, Climate Change and Environment is starting the work amidst the lack of tourists and the movement restrictions due to COVID-19.

"We have observed a degradation of the Beau Vallon beach during the north-west trade winds where tree roots are exposed and water reaches as high as the boardwalk," explained Annie Simeon, the senior climate adaptation officer at the Climate Change Division.

Simeon added that the plan for the projects started over two years ago. "It is only now that we have been able to implement it. As you know, COVID-19 has also delayed some projects but we have finally been able to start," said Simeon.

The coastal rehabilitation programme forms part of an even greater national project, with the construction of the golden mile promenade at Beauvallon beach in the north of the main island of Mahe.

The project to protect the coastline of Beau Vallon is expected to be completed in six months' time and will be done in three phases.

Phase one will include the continuation of the sea wall on Beau Vallon beach from the open gym near the Savoy hotel to La Plage restaurant.

The second phase of the project requires that the Seychelles Cable System Company secures the landing site of the underwater optical cable to ensure that the cable does not get damaged during construction and cut off the country's internet access.

The third phase will include rock armouring work. The works are being funded under the Environmental Trust Fund at a cost of around $236,000.

Beauvallon is only one of several sites on the main islands of Seychelles – 115 islands in the western Indian Ocean, under threat and needing coastal rehabilitation work.

In an interview to SNA last month, Simeon announced that a new study is expected to be carried out on Mahé and Praslin to address coastal erosion, and flooding, mitigating the effects of climate change in these areas.

The World Bank is assisting the ministry to implement the national coastal management plan to address these issues, with the goal being to manage coastal zones more sustainably.

"The study - a first of its kind for the islands – has a two-fold objective. It aims to understand flood and erosion causes, including the risks for coastal assets and communities, and identify effective and sustainable solutions, including structural options, but also considering nature-based options," said Simeon.

Five priority sites, including Beau Vallon, have been identified on the two islands, where an 11-month long study will be carried out.