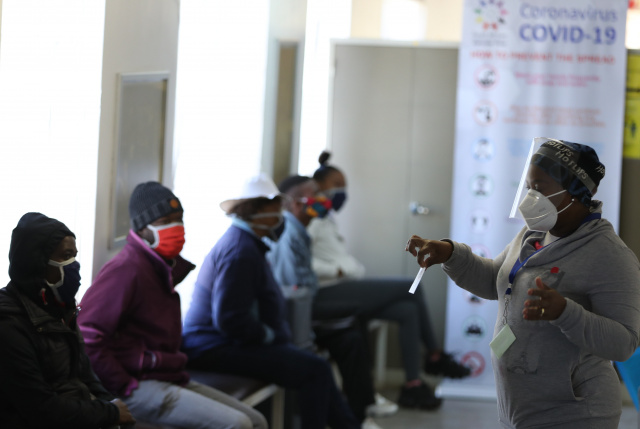 A medical worker gestures as she addresses some of the first South African Oxford vaccine trialist waiting ahead of the clinical trial for a potential vaccine against the COVID-19 coronavirus at the Baragwanath hospital in Soweto, South Africa, on June 24, 2020. (SIPHIWE SIBEKO / POOL / AFP)

Anti-vaccine sentiment, often fed by rumours spread on social media, is already thriving in the West.

But a similar dynamic is at play across Africa, according to public health experts on the continent, with people warier of Covid-19 jabs than they would be of other vaccines.

"There's a high level of scepticism," said Ayoade Alakija, the chief Africa strategist for Convince, a campaign to encourage confidence in Covid-19 vaccines.

Explanations for the wariness vary, she explained, noting that suspicion of government elites and vaccine misinformation play a role.

One prevalent conspiracy theory, for example, holds that the Covid-19 vaccines are designed to quell Africa's population growth.

Skepticism extends to the tops of some governments too. In late January, Tanzania's President John Magufuli dismissed Covid jabs as "dangerous for our health".

Andry Rajoelina, the president of the island state of Madagascar, has also touted an untested herbal remedy for Covid-19.

Many African countries are currently battling a surge in coronavirus cases, but few have seen outbreaks as large as in the West, which some argue has led to a decreased sense of urgency.

Most African countries are also months away -- at best -- from beginning vaccinations, with wealthier countries hoovering up supplies in the global vaccine race.

Moise Shitu, a 28-year-old who works as a driver in Nigeria's capital Lagos, told AFP he would refuse a vaccine.

"Our government is into fraud," he said. "They are saying there is coronavirus in Nigeria to make money".

"We are seeing reports of serious side-effects from people who took the shot in the West and they still want to bring the vaccine to us," she said.

The picture isn't uniform. Waiters interviewed by AFP in a cafe in Ethiopia's capital Addis Ababa were keen to receive a vaccine because of their risk of contracting the virus, for example.

Although hesitancy about new vaccines is common, Mamadou Traore, a vaccination advisor for Medecins Sans Frontieres, said the phenomenon has grown "much worse".

"People told themselves this isn't an illness that affects black people," he said. "It is governments' job to dispute all this misinformation".

There are few reliable studies on Covid-19 vaccine attitudes in Africa, but preliminary surveys suggest that large groups of people are wary.

In December, the Africa Centres for Disease Control released the results of an 18-country survey showing that only a quarter of respondents thought Covid-19 vaccines would be safe.

Still, the study found few vaccine denialists: about 79 percent said they would take a "safe" shot.

Richard Mihigo, the World Health Organization's vaccination coordinator in Africa, pointed out that the continent has historically seen high levels of vaccine acceptance -- which he said bodes well for future Covid-19 campaigns.

But rumours linked to the Covid-19 vaccine have also "spread like wildfire" online, he said, and are a "real issue".

In a television interview in April, for example, two French scientists suggested that companies trial vaccines in Africa first -- igniting a racism row and feeding longstanding fears about medical exploitation.

"People said: 'Yeah you see, now we can confirm that Africans are guinea pigs,'" Mihigo said, noting that the affair did "a lot of damage".

Ousseynou Badiane, the head of Senegal's vaccination programme, said that alongside access to vaccines, "fake news" posed one of the largest challenges to his country's future campaign.

Much of the misinformation shared in Senegal originates in France, he added, which is the West African state's former colonial ruler and one of the world's most vaccine-hesitant countries.

Cheikh Ibrahima Niang, a Senegalese professor of medical anthropology, said that the brutal legacy of the slave trade, plus a history of heavy-handed governments, may explain vaccine hesitancy.

Scandals such as the deaths of 11 Nigerian children in 1996, after they were administered an experimental meningitis vaccine by Pfizer, have not been forgotten either, he told AFP.

African governments need to proactively engage vaccine-hesitant citizens, he said, in a sentiment echoed by other public-health experts.

Some are already doing so: Last week, Ethiopia launched a vaccine information campaign to allay concerns.

Some national leaders, such as Guinea's President Alpha Conde, have also broadcast recordings of themselves receiving jabs.

Ayoade Alakija, the vaccine-confidence campaigner, warned of particular difficulties in tackling misconceptions in countries where trust in government is low.

"There hasn't been enough information," she said.