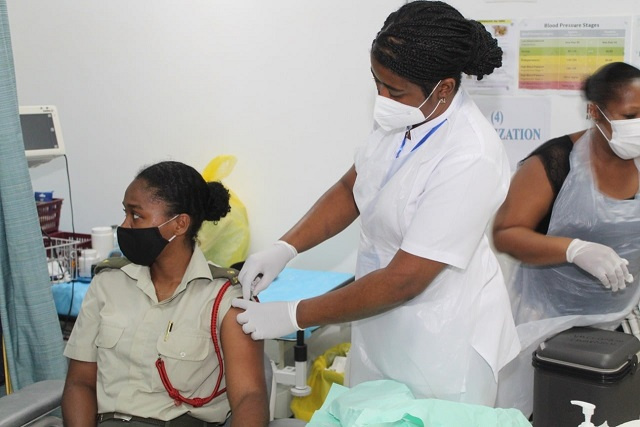 Gedeon is confident that the start of the second doses programme will during the coming days place Seychelles among the top countries which have fully immunized its population. (Seychelles Nation)

(Seychelles News Agency) - Vaccination centres in Seychelles are expected to re-open Friday to give second doses of the COVID-19 vaccine to over 25,000 people.

President Wavel Ramkalawan, who was the first to get the first dose of the vaccine in January, received his second dose on Tuesday.

Jude Gedeon, the Public Health Commissioner, said in a press conference on Thursday that as of February 2, over 36,000 peoples on the island nation have received first doses of Sinopharm and Oxford AstraZeneca, which is also known as Covishield.

According to Gedeon, Seychelles is among the top countries in the world for COVID-19 vaccines administered on a per capita basis.

"For every 100 persons, two are being vaccinated per day and the rapid way the island nation is administering its vaccination places it ahead of Israel and the United Arabs Emirates," said the doctor.

"However when you look at doses administered per 100 persons, we are third after Israel and UAE. But if you look at people who have been fully vaccinated, Israel is way ahead," he explained, adding that Seychelles does not feature on the list yet as the island nation will start giving second doses as of Friday.

Gedeon is confident that the start of the second doses programme will during the coming days place the island nation amongst the top countries which have fully immunized its population.

The Public Health Commissioner said that everyone needed to get a second dose to achieve maximum efficacy. A certificate with the type of the vaccination received and the date received will then be given to recipients of both doses.

Gedeon urged all to remain united against COVID-19 and to comply with measures in place.

The chief executive of the Health Care Agency said: "We are asking the public to be serious with the measures which we have put in place because you will see that it is reflecting on the hospitals' statistics," said Jude Louange.

Louange said that as of Wednesday, there were no positive cases of COVID–19 on the second-most populated island of Praslin, as all of the patients there have recovered.

To date 1,279 cases have been recorded in Seychelles – 115 islands in the western Indian Ocean – with 187 active cases and 1,087 having recuperated. In the last week, two deaths were recorded, bringing the total to five.