Soon to be ‘spotted’ in Seychelles – horse-riding centre expected to be opened at Grand Anse, Mahé 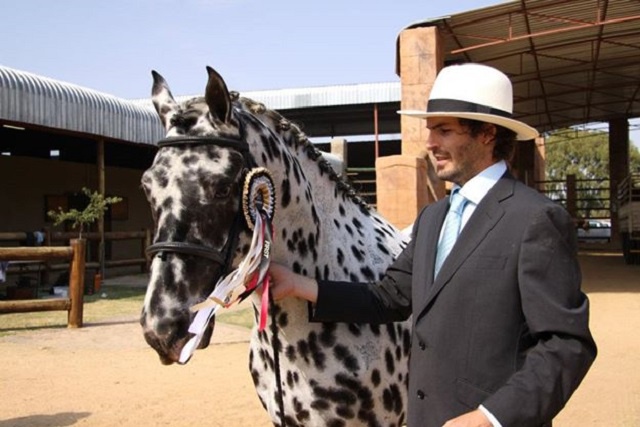 Damien and one is his stud stallion Angelos. He is the 2011 National Champion Stallion in South Africa. (Damien Dreyer)

(Seychelles News Agency) - Damien Dreyer stands proudly beside one of his prize-winning horses on his stud farm in the Underberg region of Kwa-Zulu Natal, South Africa. But this horse is unlike one I’ve ever seen before; although it most certainly is a horse, its coat resembles a Dalmatian dog with its distinctive black and white spots.

This spotty breed is known as Appaloosa and they have a rich and almost fantastic history. It is hard to imagine, but the spotted horses standing here in South Africa are the descendants of horses bred and prized for their leopard-like spots by the Nez Perce, a Native American tribe from the Idaho area.

After war broke out between the Nez Perce and the United States army in 1877, many of the Appaloosa horses had perished, leaving only a handful of breeders behind to keep the line going. Today however, the Appaloosa is one of the most popular breeds of horse in the U.S. and are recognised for their speed and agility, but most of all for their placid temperament, even in the face of danger.

It is this breed that Dreyer wishes to introduce to the tropical Indian Ocean islands of the Seychelles, where very few horses are kept. The horse enthusiast, who grew up playing cowboy on his grandfather’s ranch, could not find horse-riding facilities anywhere when he came to holiday in the Seychelles.

After learning that the only previous horse-riding company, Utagangar Riding Centre, had closed down several years ago, he decided to take over and modernise their old stables in Barbarons on the west coast of Mahé to start a horse riding centre called Turquoise Trails.

A project with a difference

The project is still under consideration from the Seychelles Investment Board (SIB) and the Seychelles Licensing Authority (SLA) for final approval, and after going through the correct procedures with the authorities Dreyer hopes to open the stable doors in June 2015.

After holding a public meeting at Grand Anse last week, Dreyer was encouraged by the generally positive attitude of local businesses and residents alike, who attended the community meeting despite the heavy rains that caused disruption and localized flooding in several places around the island.

Speaking on the phone with him yesterday, he joked that if it usually rained so hard he might consider fitting the horses with flippers and snorkels.

“I was very impressed with the large turnout – almost every seat was filled in the hall, especially due to the fact that it was raining cats and dogs,” he said.

The public raised a handful of concerns relating to the environmental impact of the project as well as the involvement of the local community, which Dreyer said he was highly appreciative of.

“Every concern raised was valid as all of these could have a detrimental long term effect if not properly addressed,” he said. “I have also found in my discussions and conversations with people that I believe many promoters and investors have bought fantastic ideas forward promising to address these same concerns but have ultimately failed. I want Turquoise Trails to be different.”

He explained that he would be bringing in seven of his most beautiful and top performing horses to share his passion and joy for horses with the Seychelles.

The project, which is intended to be an eco-tourism business and Equine Centre for local Seychellois, will offer only one ride per day during low tide with a maximum of five clients for a maximum of six days per week.

Holiday camps, which will be offered only to school children, will be run during during school holidays for two groups of eight children over a five-day period.

“This will be run from 7am to 5pm every day with adequate food provided by a local catering business. We will do our best to keep this as affordable as possible, making it accessible to everyone. We will also be offering romantic date rides, engagement and special occasions. The horses will also be available for weddings and photo shoots.”

Addressing the concerns raised about the environmental impact of operating horse trails in the area, Dreyer said that only the existing paths used by the previous operators and the owner of the private land the centre would be based on.

“No indigenous trees will be removed and erosion control methods like sand bags and drainage shoots will be put in use on steep land,” he added. “We will be working closely with the Department of Environmental Affairs for guidance in all these matters as we to would like to enjoy nature forever, discovering its beauty on horseback.”

“Horse rides will only be done on low tide on the beach and we will remain well clear of the high water mark, this enables the beach to renew itself daily in a natural way with a covering on any hoof prints by sand during high tide,” he explained. “This also ensures any turtles nesting or laying eggs will not be disturbed. If there is any turtle activity during a horse ride we will stop and return and use a different trail so that clients are not disappointed, a safe distance will also be adhered to.”

By running through a warm-up procedure before the rides, the horses should relieve themselves at the stable, leaving a minimum of manure excreted along the trails, which Dreyer says will be picked up by staff afterwards. The manure will be composted in a designated area to kill any seeds present in the manure, and the manure, which is excellent for growing organic vegetables, fruit and flowers, will be offered for sale to the public.

As for water supply concerns, Dreyer says that in addition to the two five thousand litre rain harvesting tanks that will be installed on the property, permission has been sought from the Public Utilities Corporation to use up to 500 litres of river water per day.

Turquoise Trails will also be working with the Department of Public Health to safely remove and dispose of the old asbestos roofing at the old stables.

Intending to start operations in two separate phases, Dreyer outlined that during the initial phase after opening for business, only the beach trail would be offered to the public.

Trail One, which rambles through a privately-owned forest until it reaches Barbarons beach, continues all the way up to the end of the impressive swathe of beach at Grand Anse and then returns along the same trail back to the stables, never going near a public road.

Dreyer said that the second phase would involve the creation of the second trail for more experienced riders.

“This Trail will meander along privately-owned forest until it crosses the road in one designated area and leads up towards Barbarons Peak for a view, returning the same way,” he said.

“We are applying to have special horse crossing signs put up at this area which will caution drivers to the approaching crossing and to slow down. This crossing will be in a place where we will also be able to see vehicles from both sides allowing us time to react if drivers do not adhere to road rules.”

Tethering his own horse away from the road, the riders will lead each horse safely over the road, one at a time, while Dreyer waves a red flag to warn approaching drivers.

Putting Grand Anse on the map

A man with a life-long experience and passion for horses, Dreyer sounds like a man with staying power and the will to make Seychelles a horse-lovers paradise. His intention is to offer locals and tourists alike with an unforgettable experience by enthusiastic, passionate crew members and good-tempered, happy and healthy horses.

With a selection of horses that are genetically diverse, Dreyer intends to breed new generations of horses and grow a specialised type of barley locally to meet most of the horses’ nutritional requirements.

Dreyer explained that Turquoise Trails intends to “put the Grand Anse area on the map” by offering tourists a unique experience on Mahé, which in turn he hopes will grow the area’s economic potential.

“With more tourists coming into this area through the promotion of our business it will mushroom out to support local shops and restaurants,” he said. “We will be promoting local businesses through word of mouth and employing youths that are passionate about horses as much as our business can allow.”

Believing that children can be positively influenced by understanding animals and being connected to nature, Dreyer wants to give local children the opportunity to be stimulated by the healthy activity of horse riding.

“Being with horses teaches one responsibility for oneself, animals and the environment. We also intend to give a lot of our time and of ourselves to the community,” he added.