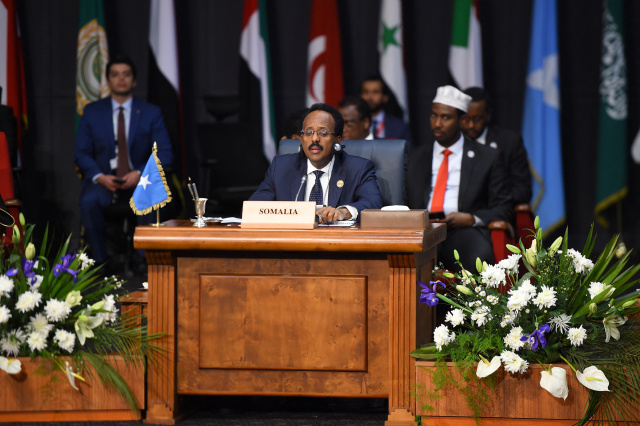 (AFP) - Somalia's opposition leaders have announced that they no longer recognise President Mohamed Abdullahi Mohamed, after his term expired without a political agreement on a path toward elections to replace him.

The Horn of Africa nation was supposed to hold indirect elections before February 8 but the deadline was missed as the central government and federal states failed to break a deadlock over how to proceed with a vote.

It now confronts a political crisis alongside a violent Islamist insurgency, a locust invasion and serious food shortages.

A coalition of opposition candidates urged the president, better known by his nickname Farmajo, to "respect the constitution" and ensure a peaceful transfer of power in the fragile country.

"Starting from 8th February 2021, the council of opposition candidates does not recognise Farmajo as president," they said late Sunday in a statement.

"The council will not accept any form of mandate extension through pressure."

The group is allied against Farmajo but comprises candidates running individually for his job, including two of Somalia's former presidents.

They called for the creation of a transitional national council composed of the speakers of parliament, opposition figures, regional leaders, and civil society groups, to steer the country through this period.

Some roads in Mogadishu, including the route to parliament, were closed Monday, witnesses said, after a tense evening in the capital.

"We could not sleep last night because so many gunshots were being fired by opposition supporters," said one resident, Abdullahi Ali.

Farmajo, who is running for a second term, has accused his regional rivals of reneging on an earlier agreement struck in September that laid out a timeline for a vote.

That deal would have seen indirect parliamentary and presidential elections held in late 2020 and early 2021.

But it fell apart as squabbles erupted over how to conduct the vote.

Jubaland, one of the semi-autonomous regions at odds with Farmajo, accused the president of refusing their attempts at compromise. Three days of talks between the parties collapsed Friday without a deal.

The United Nations had warned that Somalia risked entering uncharted territory should the government's mandate expire without a consensus on the election process.

Last week, the government's foreign backers including the UN and the African Union warned against any attempts at holding partial elections, or any process that did have broad consensus.

Somalia plunged into chaos after the 1991 overthrow of president Siad Barre's military regime, leading to years of clan warfare followed by the rise of the Al-Shabaab jihadist group which once controlled large parts of the country and capital.

This election was to follow a complex indirect system after hopes of hosting Somalia's first one-person, one-vote ballot since 1969 was abandoned over security and political problems.

Under this system, which mirrors past elections, special delegates chosen by Somalia's myriad clan elders pick lawmakers, who in turn choose the president.