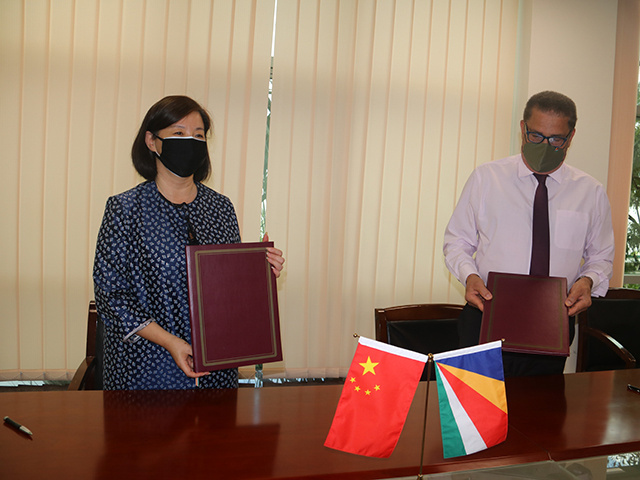 (Seychelles News Agency) - Seychelles has received a grant of SCR132 million ($6.2 million) from the Chinese government to finance projects that the two governments will do in consultation, said the Ministry of Foreign Affairs.

The grant will be available under an economic and technical cooperation agreement signed by Seychelles Minister of Foreign Affairs, Sylvestre Radegonde, and Chinese Ambassador Wei Guo on Monday in a short ceremony.

In his address, Radegonde thanked Ambassador Guo for the continued solidarity with the Seychelles and said that "I do not need to tell you the particular value I attach to this grant of 40 million RMB, which is coming at a very difficult time for many countries and especially for small island states like Seychelles. It provides substantial support to our development efforts."

On her side, Guo said that under this framework "we have completed a lot of projects which included the building of the parliament, the courthouse, schools, then as you saw another project under construction is the building for the SBC."

"I hope that both the Chinese and the Seychellois sides continue to cooperate to use this grant to accomplish other projects in the interest of our people and our countries," she added.

The grant comes after last month's official visit of Chinese State Councilor and Foreign Minister, Wang Yi, through which Seychelles received $11 million, including $4.6 million to finance a project that will help the country generate more renewable energy.

Seychelles, an archipelago in the western Indian Ocean, established diplomatic relations with China 44 years ago. Since then the two countries have maintained a good momentum of growth in bilateral relations, realising fruitful cooperation in economics, trade, education, culture and other areas.