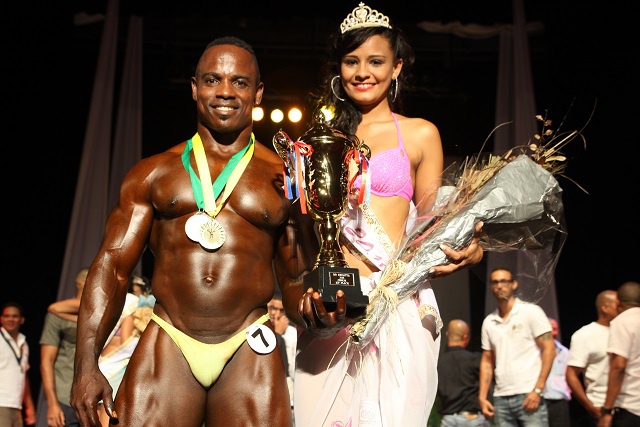 (Seychelles News Agency) - For the first time in Seychelles, ten Seychellois ladies and nine bodybuilders shared the stage Tuesday evening to compete for the Miss Regatta and Mr Regatta titles.

The event took place at the International Conference Centre in the Seychelles capital of Victoria.

After parading on the catwalk in casual, swimwear and evening wear and answering questions from the jury, Yasmin Ghislain, a 20 year old hostess at Masons Travel, one of Seychelles’ Destination management Company (DMC) who wishes to become a professional beautician, was crowned Miss Regatta 2014.

Ghislain is a resident of Beau Vallon northern district of the archipelago’s main island of Mahé the same district where Regatta, a popular weekend of aquatic sports activities and fun fair takes place every year.

It’s Round Table Seychelles - an affiliate of Round Table – an international charitable organization founded in Norwich, United Kingdom, in 1927, that organizes the annual event and which has organized the Miss Regatta contest.

‘Water’ was the theme chosen for the beauty contest in line with this year’s theme for the Regatta weekend which is ‘Healthy Living for a cancer free world.’

After being crowned Miss Regatta 2014 last night, Ghislain said that she is very much inspired by the charitable work being done by Round Table.

"Suffering from cancer, a person goes through some bad times. But we have to help them to overcome this as it is not the end of the world,” she told SNA.

The title of First Mermaid was awarded to 31 year old Simone Sauzier, a mother of two, who also won the ‘Miss Personality’ whilst Berina Saunders, a 25 year old operations Bank clerk was crowned Second Mermaid.

The Miss Regatta pageant which was initiated in 2005 was held until 2010.

After a hiatus of 4 years, it is now back on the calendar of activities of the Regatta event.

"We thought it would be great bringing back Miss Regatta for the first time since 2010 and staging it alongside Mr Regatta would make it a double event," the President of Round Table Seychelles, Vincent Kim Koon told SNA.

After a four year break the pageant has brought in some new elements. For the first time, it was open to participants between 16 to 35 including those with children. Each of the 10 contestants who were groomed by Telly's Modelling Agency and had to submit a social project in order to qualify for the pageant.

While Ghislain took home the Miss Regatta title, bodybuilder Rodney Henriette was the one who took home that of Mr Regatta.

The bodybuilders had to perform the seven mandatory and there was also free posing, where every bodybuilder tried to impress the judges and audience by flexing and grooving their muscles.

The 41 year old bodybuilder from Hangard Street, located on the periphery of the capital of Victoria, has been doing the sport for the last 8 years.

This is his first major title after coming out runner up in 2012 and 2013 of the same contest.

“The competition was a bit tight but I was confident that I could win the title,” said Henriette, who told SNA that he has been training hard for the last four months before the competition.

Joe Gabriel and Jolaine Valentin came out in second and third place respectively.

The crowning of Mr and Miss Regatta has set the stage for the regatta weekend which starts this Friday September 26 until September 28.

Round Table Seychelles which was set up in 1973 and has been organizing Regatta for more than 30 years now.