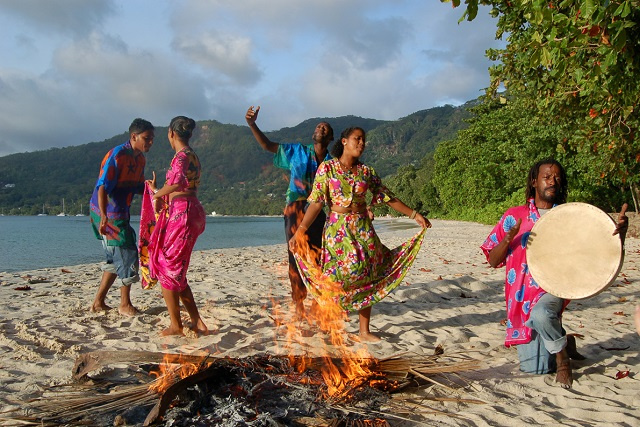 Kalebi said that the new structure will give an opportunity for these programmes, activities and developments to take place. (Gerard Larose, Seychelles Tourism Board)

(Seychelles News Agency) - A national institute for culture and heritage will soon be created to promote and protect the Seychellois Creole culture, the Mayor of Victoria said Thursday.

Mayor David Andre told a news conference that the institute will help create consistency in the island nation's efforts to protect its heritage.

"In the past, the Department of Culture fell under the responsibility of different ministries. With this, we saw that there was no continuity. There were moments, when the minister in charge of culture was perhaps passionate about a certain thing and push an agenda so that allowed it to progress. However, others came and maybe felt that this was not a priority or important and made changes," said Andre.

The mayor said that if a minister continues to be in charge of culture, improvements won't be made.

"Following my reflections, researches and discussions, I feel that culture should become an institution of the state and this is the new concept that we are talking about. We are talking about having an institution that falls under the head of state, which will have its advisory council, who have the Creole culture at heart and wants to see that it is promoted and preserved," he continued.

Andre explained that the members of the council headed by a secretary of state will be the guardians of the Seychellois Creole culture and heritage. Having such an institute will allow culture to prosper despite any political change that will happen in the country in the long run.

It is often said that the Seychellois people are a melting pot of races, representing an ethnic diversity that dates back from the second half of the 18th century with origins from Africa, Europe and Asia.

The principal secretary for culture, Cecile Kalebi, said that there will be some structural changes within the department. Following consultations with partners and people committed to promoting the culture of Seychelles, the concept is in line with the department was already working on.

"We believe that the structural changes that will be made soon will provide more strength to the Department of Culture so that it can enforce regulations and programmes that we want to make available to the public. As you know, a culture without the participation of people will die. As a Seychellois, you are the guardian of your culture, so it is in our interest to make sure that people can integrate and see themselves as part of the culture that they belong to," said Kalebi.

She added that the new structure will give an opportunity for these programmes, activities and developments to take place.

Patrick Victor, the ambassador for culture in the island nation in the western Indian Ocean, said that this is an ideal opportunity for cultural activists to make a contribution through this new structure.