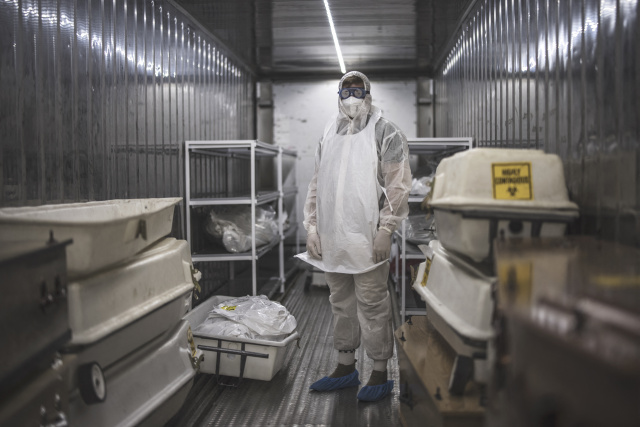 A morgue attendant at the Johannesburg branch of the South African funeral and burial services company Avbob stand next to provisional coffins inside a refrigerated container where bodies of patients deceased with COVID-19 related illnesses are kept isolated ahead of their burials on January 22, 2021. (MARCO LONGARI / AFP)

(AFP) - Deaths from Covid-19 in Africa surged by 40 percent over the last month, the World Health Organisation said Thursday, as the continent's toll approaches 100,000.

"Over 22,300 deaths were reported in Africa in the last 28 days, compared with nearly 16,000 deaths in the previous 28 days," said the WHO Africa office based in the Republic of the Congo capital Brazzaville.

"This comes as Africa battles new, more contagious variants and gears up for its largest-ever vaccination drive," the UN agency said in a statement after a virtual press conference.

The first coronavirus infections in Africa were detected in February last year. More than 3.7 million cases have been recorded since, with 96,000 deaths, according to the latest figures released by WHO Africa on Thursday.

"The continent is expected to reach 100,000 deaths in the coming days," the WHO added.

"The increasing deaths from COVID-19 we are seeing are tragic, but are also disturbing warning signs that health workers and health systems in Africa are dangerously overstretched," WHO's Africa director Matshidiso Moeti said in the statement.

Despite fears it would be hit hard, Africa saw fewer cases than much of the rest of the world during the earlier phase of the pandemic.

"In the second wave as cases surged far beyond the peak experienced in the first wave, health facilities have become overwhelmed," the WHO said.

With vaccine scepticism high in some parts of the continent, Moeti urged all Africans to "go out and get vaccinated when a vaccine becomes available in your country".

General » Be a reporter: Write and send your article » Subscribe for news alert
Tags: health, virus, Africa, WHO