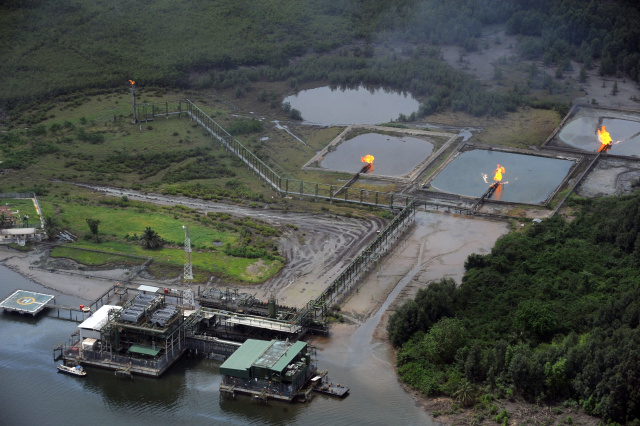 A photo taken on March 22, 2013 shows an aerial view of Shell Cawtharine channels at Awoba in the Niger Delta. Shell has shut a major pipeline in Nigeria for the second time in less than a month after locating another leak on the line repeatedly hit by oil thieves, the company said on July 12, 2013. (AFP PHOTO / PIUS UTOMI EKPEI)

(AFP) - Britain's Supreme Court ruled on Friday that more than 40,000 people in the Niger Delta region of Nigeria can make pollution claims against Anglo-Dutch energy giant Shell in English courts.

The ruling overturned a 2017 decision against the Ogale and Bille communities, who brought legal claims for clean-up and compensation following decades of repeated spills in the oil-rich region.

The claimants have argued for five years that their case against Shell and its subsidiary, the Shell Petroleum Development Company of Nigeria (SPDC), should be heard in London because they could not expect justice in a Nigerian court.

The UK decision comes two weeks after a court in the Netherlands ordered Shell to compensate Nigerian farmers for oil spills on land in two villages in the Niger Delta after 13 years of legal battles.

In their judgment, five judges at Britain's highest court said the previous decision by the lower Court of Appeal was a "material error of law" and focused too narrowly on the relationship between Shell and its Nigerian subsidiary.

Shell had argued it could not be held legally responsible for the pollution in region in southern Nigeria and so the cases should not be heard in England.

"This Supreme Court judgment gives real hope to the people of Ogale and Bille who have been asking Shell to clean up their oil for years," said Daniel Leader, from London law firm Leigh Day, which represents the claimants.

He said he hoped the decision would lead to action from Shell, and called the ruling a "watershed moment" to bring multinational companies to account.

"Increasingly impoverished communities are seeking to hold powerful corporate actors to account and this judgment will significantly increase their ability to do so," he added.

Shell called the ruling "disappointing" and attributed the spills in the Niger Delta to criminal activity.

"The spills at issue happened in communities that are heavily impacted by oil theft, illegal oil refining, and the sabotage of pipelines," it said in a statement.

"Regardless of the cause of a spill, SPDC cleans up and remediates."

The Ogale and Bille villagers say they have suffered systematic and ongoing oil pollution for decades because of Shell's operations in Nigeria, including the pollution of drinking water.

In 2011, the United Nations Environment Programme said spills in the Niger Delta would take 30 years to clean up.

Shell has faced other legal action linked to its operations in Nigeria in Dutch court.

The widows of four Nigerian activists executed by the military regime of General Sani Abacha in the 1990s have accused Shell of complicity in their deaths.

The men were hanged in 1995 alongside Ken Saro-Wiwa, who campaigned against Shell activities in the Ogoniland area of the delta because of health and environmental impacts.

Shell also faces a landmark legal bid to force it to meet emissions targets in the Paris climate accords, brought by several environmental groups in the Netherlands led by Friends of the Earth in 2019.

General » Be a reporter: Write and send your article » Subscribe for news alert
Tags: Britain, Nigeria