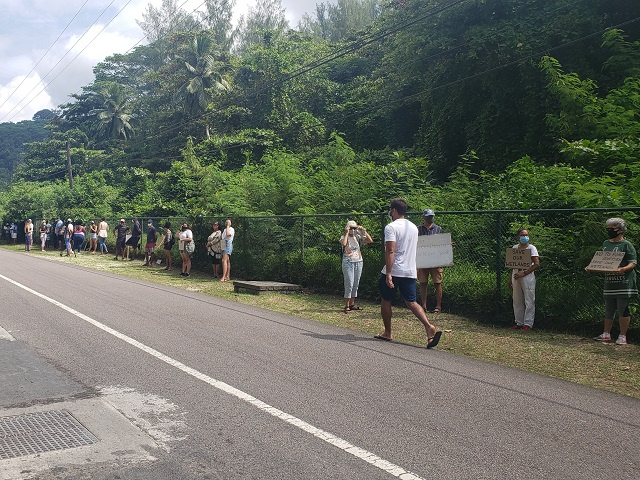 The group expressed concerns that the development would affect the protection of the wetland, beach access, road diversion and livelihood of the inhabitants. (Salifa Karapetyan, Seychelles News Agency)

(Seychelles News Agency) - About three dozen residents took to Seychelles' Anse à La Mouche road in the south-west of the main island of Mahe on Saturday to peacefully protest the development of a 120-room hotel in the area.

The group expressed concerns that the development would affect the protection of the wetland, beach access, road diversion and livelihood of the inhabitants.

Many of the protestors present held banners asking to "Save Our Wetlands" and "No to Road Diversion" and "Planet Over Profit" among others.

One protestor, an inhabitant of Anse à la Mouche and member of Sustainability for Seychelles (S4S), Marie-Therese Purvis, said that since the project was proposed there have been several meetings held with concerned parties, including NGOs and inhabitants, where "we expressed our concerns."

"This has always remained on the agenda of CEPS (Citizen Engagement Platform Seychelles) and they are backing us up as they also see that the development will divide the community in two, and destroy the wetland despite Seychelles being a signatory to the Ramsar Convention since 2005. There is about 10 percent of wetlands that remains on Mahe," said Purvis.

She explained that "following the meeting a scoping report was sent to the department of the environment as part of the EIA (Environmental Impacts Assessment ) process to express our concerns and proposed alternative."

"The department never got back to us, even if we have called on different occasions. It was only at the start of 2020 that Ms Nanette Laure got back to us saying that their only reservation is that the new road will destroy too much of the wetland and had asked that to resurvey the area and make it higher uphill," said Purvis.

She added that she learnt through some acquaintances that the construction of the road was being tendered in September 2020, following which more letters were forwarded to the planning authority with the NGO's concerns, which came back with no concrete answers.

Earlier this month, Purvis brought a petition to the president of Seychelles, Wavel Ramkalawan, saying that "there is always the option to negotiate."

"We want our concerns to be taken into consideration, that the EIA process and other procedures be properly followed," she continued.

Anael Bodwell, a member of SYAH (SIDS Youth AIMS Hub) Seychelles, said that even if she is an inhabitant of the northern district of Anse Etoile, she came to show her solidarity to people of Anse à la Mouche.

"As SYAH Seychelles we advocate for sustainable development and we are here to give our support. We would like the government to take a stand and listen to the youth who are voicing out today. We would like our future generation to enjoy this wetland." said Bodwell.

Referring to the construction of a road diversion which has already started on the site, Bodwell added: "From what we learnt, construction was supposed to start in March and we are wondering why they are rushing with it."

She added that "it is a shame that the concerned authorities have not taken into account what has been voiced out by the inhabitants."

"There are arguments that this project will bring economic benefits for Seychelles, but at the same time, we can achieve economic development without harming the environment. They could have scaled down the project, and there are other places they could have built this hotel," Bodwell continued.

The member of SYAH added: "Frankly, there are a lot of hotels in Seychelles and it is not guaranteed that in the next two or three years we will be able to meet the bed capacity for tourism. It is time to pull the brakes on building hotels now and think about the environment and our tomorrow."

Another protester, who asked to not be named said that "there has been a lot of debate online on social media and a lot of people have been saying that this should go through because we need foreign investment and foreign exchange in the country, especially during this crisis."

"I think the message is 'we are not saying we shouldn't be inviting foreign investment - we need to be smart about the way we want to develop the economy, especially in the tourism industry. If we want to have this sustainable tourism goal and vision, is this part of the vision?" asked the protestor.

Also present was the Member of the National Assembly of the Anse Boileau district, Philip Arrisol, who said that he is unable to take sides in the matter as he has been elected by the people of Anse Boileau and must represent all fairly.

"I feel that the point of view of both parties – those for and against the development - should be taken into account and if there is a need to go back on the table to discuss certain matters, this can be done so that when the project goes on, both parties can get what they want," said Arrisol.

When asked if this is a topic that he will bring before the National Assembly, Arrisol said that "I will bring forth the point of view of the people who will approach me. I will bring it before the assembly as either a motion or a question depending on what I am advised to do."

While tourism is the top contributor to the economy of the island nation in the western Indian Ocean, there are already several large tourism establishments on the western coast of Mahe, notably Anantara Maia Seychelles Villas, Kempinski Seychelles Resort, Four Seasons Resort Seychelles and Constance Ephelia.

General » Be a reporter: Write and send your article » Subscribe for news alert
Tags: Royal Development Company, Sustainability for Seychelles