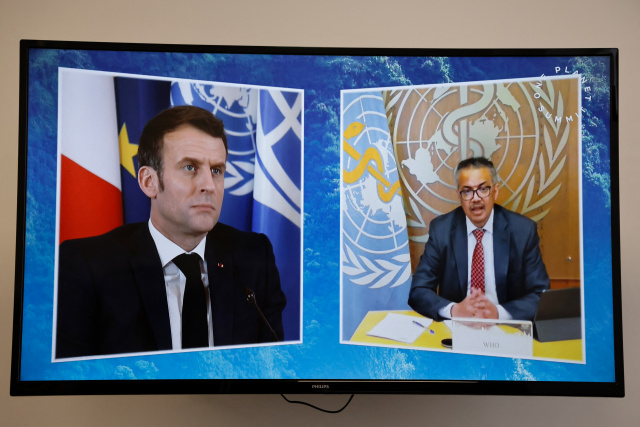 French President Emmanuel Macron (L) and World Health Organization (WHO) Ethiopian Director-General Tedros Adhanom Ghebreyesus attend a video conference meeting at the One Planet Summit, part of World Nature Day, at the Reception Room of the Elysee Palace, in Paris, on January 11, 2021. The One Planet Summit, a largely virtual event hosted by France in partnership with the United Nations and the World Bank, will include French President, German Chancellor and European Union chief.
Ludovic MARIN / AFP / POOL

(AFP) - At the initiative of Britain, which boasts of having an effective vaccination program, the UN Security Council on Wednesday will debate the problem of global access to Covid-19 vaccines, raising issues likely to underscore sharp differences between council members.

How, for example, can vaccines be distributed fairly -- without, as has been the case, going first to the richest countries in the North while those in the South suffer?

Should blue-helmeted UN peacekeeping troops in some 15 countries, along with other UN employees deployed around the world, be declared essential workers and receive vaccine priority -- including in countries yet to receive vaccine doses?

If so, who should provide the jabs -- the United Nations, the troops' countries of origin or those where they are deployed?

"Vaccine, vaccination is not really the job of the Security Council," said one ambassador, speaking on grounds of anonymity.

He added that no resolution on the matter is likely to come this week.

The Security Council's only direct involvement in the pandemic came in July 2020 when, after long and difficult negotiations to resolve sharp US-Chinese tensions, it passed a resolution encouraging cease-fires in countries in conflict in order to limit the spread of Covid-19.

Britain recently shared with a few other countries a draft resolution on vaccine management, diplomats said.

"There is a draft resolution," one said. "The negotiations have just started. It will take some time."

Vaccination "is the big challenge now," said Olof Skoog, the European Union ambassador to the council. "A long way to go before people are fully vaccinated."

Skoog, who is Swedish, noted that the EU has contributed to creating the global Covax initiative which, under UN auspices, aims to provide at least two billion doses by the end of the year, including at least 1.3 billion doses to 92 lower-income countries.

"What we don’t want to see is a kind of vaccine apartheid," with rich Northern countries receiving ample supplies and poorer Southern countries -- as South Africa recently warned -- going without, said the ambassador speaking anonymously.

He said negotiations over a Security Council resolution were likely to be "complicated," with some countries uncomfortable at the "transparency" involved in committing themselves to leave no country wanting for vaccine.

Several countries, including China, Russia and some Gulf nations, have already launched "vaccine diplomacy" initiatives, either showcasing their own production capacity or providing easier access to vaccine doses.

UN Secretary-General Antonio Guterres has repeatedly sounded a warning that as the virus and its multiple variants spread around the world, global security can be assured only if everyone enjoys the same level of protection.

He has repeatedly called for vaccines to be treated as a "global public good," without specifying exactly how that might happen.

Asked recently about the eventual UN role in establishing a sort of counterfeit-proof "vaccination certificate," UN spokesman Stephane Dujarric said that "there needs to be international coordination and standardization of these things moving forward."

Also of concern, he added, "is the criminal element of people falsifying vaccine certificates or, even worse, giving people false... vaccines that are not actual vaccines.

"So, I think the more international cooperation we can get on this, the better it is."