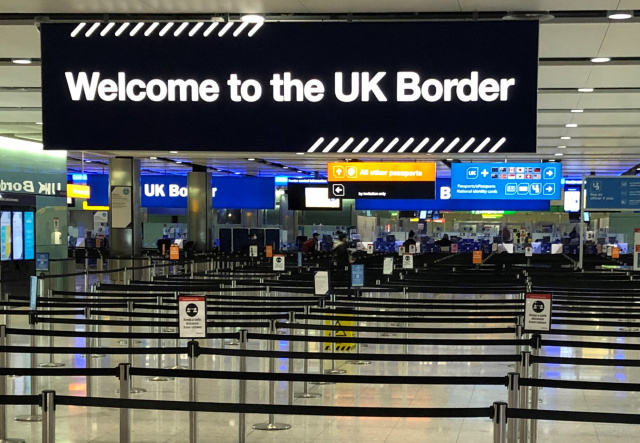 (FILES) In this file photo taken on December 31, 2020, a UK border sign welcomes passengers on arrival at Heathrow airport in west London. Border restrictions were being tightened around the world on January 25, 2021 in the face of an unrelenting coronavirus threat, after a weekend in which anger at social distancing rules bubbled over into fiery clashes in the Netherlands. The United States was set to join France, Israel and Sweden in pulling up the drawbridge to certain arrivals, with special concern about new strains of the pathogen that originated in Britain and South Africa.(Ben FATHERS / AFP)

(AFP) - Britain is aiming for a "cautious but irreversible" plan to exit coronavirus lockdown, Prime Minister Boris Johnson said on Monday, as the country greeted the first arrivals subject to a new hotel quarantine regime.

With more than 117,000 Covid deaths, it is one of the world's worst-hit countries. Johnson has been criticised in the past for acting too quickly to relax measures and too slowly to reimpose them.

But lockdown-sceptic MPs are pressing for an accelerated exit after the country passed a vaccine milestone on the weekend, with 15 million people having received their first jabs.

Speaking at a health clinic in southeast London, Johnson said the government needed to be "very prudent" as it reviews a third stay-at-home order in England that has shut down schools, non-essential businesses and hospitality venues since early January.

"I would much rather see a plan that was cautious but irreversible and one that proceeds sensibly in accordance with where we are with the disease," Johnson said.

The government is due to set out a roadmap to relax the measures in England on February 22, and has indicated schools could reopen on March 8.

Health Secretary Matt Hancock said there was "some way to go" before easing restrictions, stressing the government was awaiting key data on the effect of vaccines on transmission.

But over the weekend, more than 60 MPs from the ruling Conservatives signed a letter calling for Johnson to commit to lifting all legal controls by the end of April.

Once enough people are inoculated, "it's time for us to take a bold stride into life and start to recover our society and our humanity", lawmaker Steve Baker told Talkradio on Monday.

Meanwhile, the first travellers required to stay in quarantine hotels arrived in the country on Monday.

The policy, designed to fight emerging variants of the coronavirus, requires all UK citizens and permanent residents entering England from 33 "red list" countries to self-isolate at their own expense in an approved hotel for 10 days.

Other visitors from the 33 countries -- including all South American nations, South Africa and Portugal -- are currently barred from visiting the UK.

One woman flew in from Zambia and was one of a handful of individuals bussed from London's Heathrow airport to a nearby hotel.

Roger Goncalves, who flew back from Sao Paulo in Brazil, told the BBC the cost was "crazy".

"I did my test for coronavirus. The test was negative. Why do I need to stay in my room for 10 days," asked the delivery driver, who now lives in Britain.

Under the new rules, arrivals found to have given false information about being in one of the countries 10 days before travel could receive up to 10 years in prison -- which has drawn criticism for being excessive.

The government says it has signed contracts with 16 hotels, securing nearly 5,000 rooms near English airports, with a further 58,000 rooms on standby, as it belatedly follows the example of others such as Australia and New Zealand.

"We've been working with the airport and with the Border Force to make sure everybody knows the process," he told Times Radio. "And it does appear to be going smoothly this morning."