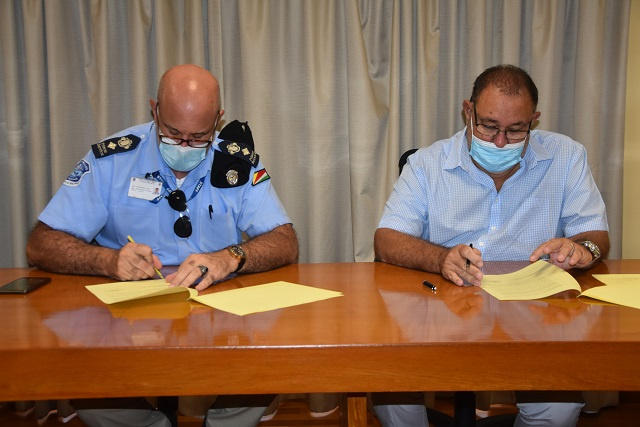 A memorandum of understanding was signed earlier last week to facilitate the programme, which is not new, as prisoners were used for many years in agriculture on the outer islands of Seychelles. (IDC)

(Seychelles News Agency) - Seychelles is to launch large-scale production of onions, ginger and garlic for local consumption involving low-risk convicts from the prison.

The redevelopment of agriculture on the outer islands is supporting national efforts to relaunch the sector and it forms part of a rehabilitation project between the Department of Prison and the Islands Development Company (IDC).

In a joint press conference between the Ministry of Internal Affairs, IDC and the Department of Prison on Friday it was revealed that up to 30 inmates will benefit under the programme, with the first six prisoners travelling to Coetivy - where the programme will run - during the first week of March.

The rehabilitation programme is not new, as prisoners were used for many years in agriculture on the outer islands of Seychelles, but due to challenges, the project stopped in 2019.

"We have learned from the past programmes and we have fixed the issues that we had in the past such as human resources," explained Errol Fonseka, Minister for Internal Affairs. Fonseka said that the project will support the government's efforts to breathe new life into agriculture and added that a memorandum of understanding was signed earlier last week to facilitate the programme.

The chief executive of IDC, Glenny Savy, told the press conference that the programme will allow these inmates to develop marketable skills, to be productive and in a way give back to society. They will be entitled to an allowance, which will be used to support their families or pay fines which they may have.

The deputy chief executive of IDC, Christian Lionnet, will oversee the programme. Lionnet told journalists that the plan is not to compete with local farmers but rather produce crops such as garlic, ginger and onions, which are consumed in large quantities and are also imported, draining the country of foreign exchange.

"We are targeting products not grown on Mahe. So we want to fight against importation and that is why one of our targets is onion, garlic and ginger, so if we can produce local it would be a big advantage for the country," explained Lionnet.

The island of Coetivy has a long history with agriculture thanks to its size, the abundance of freshwater and its proximity to Mahe, the main island of the archipelago in the western Indian Ocean.

"I would also like to add that we have an agreement to conduct a similar programme on other outer islands such as Desroches which we are using for farming as it has a similar soil composition and climate as Coetivy island," added Savy.

The rehabilitation programme will start at Coetivity as a similar programme existed there up to 2019 and currently has enough infrastructure to cater for the targeted number of inmates.

The Superintendent of Prison, Raymond St Ange, said that "We will also have prison guards that will be working alongside IDC staff," adding that they do not expect any breach of security as the selected inmates have been well behaved.

All administration and support during the project will be provided by IDC and not the government. The project will also focus on the rearing of animals such as pig and chickens, aquaculture and construction, as the development of tourism establishment on the island is also on the table.

In an interview to mark his first 100 days in office, President Wavel Ramkalawan expressed his wish to revive the plantation industry of the islands. Responding to a question from SNA on this issue Lionnet said that the company is exploring other ways to exploit coconut which for now is only being exploited for oil.

"There is also a plantation of vanilla on the island, a plantation which was planted around 1980, 85 which still exists on Coetivy. It is not bearing fruits because it is not being looked after. We are in consultation with a vanilla expert from Madagascar who will come to assist us to reestablish our plantation. This we think will bring a lot of benefits in terms of foreign exchange for the country, because nowadays on the world market vanilla has a price that is almost like that of gold," concluded Lionnet.