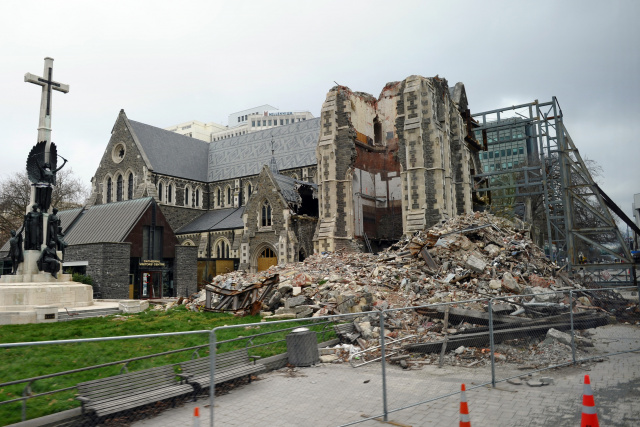 (FILE) The badly damaged Christchurch Cathedral is pictured on September 7, 2011 during a tour given to foreign journalists visiting the city ahead of the rugby 2011 World Cup. England rugby manager Martin Johnson and several members of the playing squad visited the city to see the stadium and the city centre which were damaged by an earthquake in February. (AFP PHOTO / PAUL ELLIS)

(AFP) - Although a decade has passed, New Zealander Gordon Cullen still vividly recalls his daring escape from a high-rise tower block during the deadly Christchurch earthquake on February 22, 2011.

Trapped in a fifth-floor office after the 6.3-magnitude shake that would claim 185 lives in the South Island city, Cullen exited in dramatic style, dangling a fire hose from a smashed window and clambering down to the roof of a neighbouring car park.

"Filing cabinets were falling over, desks were going end to end, there was a lot of screaming," the investment adviser told AFP.

"We tied the fire hose around a sofa, locked it up against the window and I just went hand over hand and lowered myself down.

"I did think at the time that my hands were getting pretty hot. I was trying to line up a car, so that if I dropped I'd have landed on the car bonnet."

Cullen made it out unharmed and -- as the city of 400,000 prepares to mark the anniversary of the disaster -- counts himself among the lucky ones.

"It's been a long time, here were are 10 years on and it's still pretty raw for some people," he said.

Christchurch had survived earthquakes before, but the seismic jolt that hit on February 22, 2011 had a shallow epicentre of just five kilometres (3.1 miles) on a previously unknown fault that lay directly under the city.

The results were devastating: office buildings crumpled, jagged fissures opened up on busy roads, and shop awnings collapsed onto pedestrians who moments before had been enjoying a lunchtime stroll.

Vast swathes of the suburbs became a quagmire as liquefaction -- quake-generated quicksand -- undermined the ground that thousands of homes were built on.

Most fatalities were in the CTV Building, a six-storey, 1980s-era office block that "pancaked" within 20 seconds of the quake hitting then burst into flames.

A total of 115 died in that structure alone, including 65 foreign students, mostly from China and Japan.

An official investigation found the building was so badly designed it should never have received planning permission and construction codes nationwide were tightened significantly.

A 7.1-magnitude quake in September 2010 had weakened buildings but caused no direct fatalities and Christchurch mayor Lianne Dalziel conceded the relative success withstanding that tremor had led to complacency.

"The September earthquake was a wake-up call that we should have taken more notice of as a city," she said.

Among the CTV dead was Maysoon Abbas, wife of Maan Alkaisi, who maintains a dogged campaign to bring the engineers who designed the building to trial, even though police maintain there is insufficient evidence.

"Everybody knows that justice has not been served," Alkaisi told AFP.

"There's been no action to ensure that we have deserving closure from this terrible event, even after 10 years."

Following the quake, and the thousands of aftershocks that kept residents on edge for the next 12 months, came an ambitious but slow rebuild that dragged on for years, preventing the city from moving forward.

Vacant lots filled with weeds and pools of stagnant water marred the once thriving downtown area as construction stalled due to a combination of bureaucratic inertia and disputes over building insurance payouts.

"For a long time, we were really worried whether we wouldn't have our city back but now we're feeling a lot more optimistic," Alkaisi said.

The Christchurch that Prime Minister Jacinda Ardern will visit for a memorial service on Monday is fundamentally different from the city that existed before the 2011 quake.

Once regarded as "a little slice of England", mayor Dalziel said Christchurch's focus now is not on history but embracing the city's environment, including the Avon River.

"We've turned to face the river and really embrace it as the heart of our city," she said, citing new terraces on the banks that are lined by bars and restaurants.

Not even the horror of the Christchurch mosque attacks in March 2019, when a white supremacist gunman killed 51 Muslim worshippers, could derail the city's revival.

Dalziel said the social supports networks developed after the quake helped the city unite behind its Muslim community in the wake of the attacks.

In the city centre, repair work is finally underway on the neo-Gothic Anglican cathedral that was once the symbol of Christchurch but has been fenced off since sustaining major damage in the quake.

The retail precinct is bustling and several major projects are on the way, including a convention centre and a sports stadium.

"We've come a long way. We've still got a long way to go but I really do think that as a city we've turned the corner," Dalziel said.

General » Be a reporter: Write and send your article » Subscribe for news alert
Tags: NZealand, earthquake