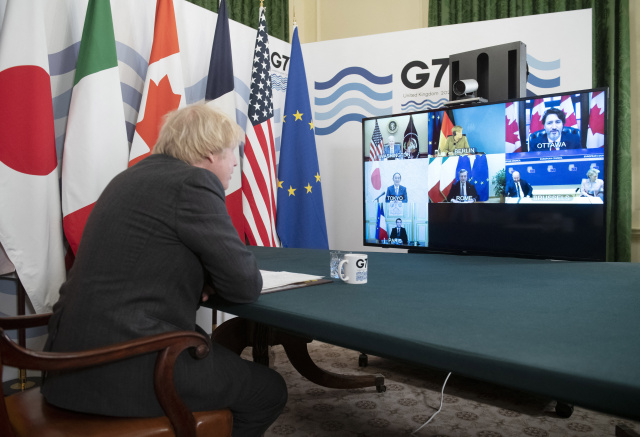 With 45 percent of injections so far among the rich club -- which accounts for just 10 percent of the global population -- the G7 on Friday said its aid to projects like the World Health Organization's Covax now amount to $7.5 billion. (AFP)

With 45 percent of injections so far among the rich club -- which accounts for just 10 percent of the global population -- the G7 on Friday said its aid to projects like the World Health Organization's Covax now amount to $7.5 billion.

The increased pledges from the US, Germany, France, Britain, Italy, Japan and Canada came as permanent UN Security Council member Britain showed a draft resolution to other countries on the global body, calling for wealthy nations to share doses with poor and war-torn states.

Seen by AFP, the text "emphasises the need for solidarity, equity, and efficacy and invites donation of vaccine doses from developed economies to low- and middle-income countries and other countries in need."

Meanwhile Russia pressed ahead with its home-grown vaccination programme, saying 120,000 doses of its third authorised coronavirus vaccine, CoviVac, will reach people by March, following in the footsteps of the Sputnik V and EpiVacCorona shots.

The new vaccine, still in final stage clinical trials, was produced by the state-run Chumakov Centre based in Moscow and employed a different method of development from Sputnik and EpiVacCorona, using an inactive virus.

"Today Russia is the only country in which there are already three vaccines for the prevention of Covid infection," Prime Minister Mikhail Mishustin said.

And New Zealand began what director-general of health Ashley Bloomfield called a "small but important step in a long journey" by launching jabs for high risk citizens and those returning from overseas, along with border and quarantine workers.

Neighbouring Australia is set to start its own scheme on Monday.

In Argentina, health minister Gines Gonzalez Garci resigned late Friday after it emerged that he had been helping friends skip the line for vaccine shots.

President Alberto Fernandez called on him to quit after a 71-year-old journalist, Horacio Verbitsky, announced on the radio that his longstanding friendship with the minister helped him get vaccinated in his office ahead of the general population.

Local media reported that other people close to the government were also vaccinated at the health ministry.

In Romania, the government pushed the country's thousands of homeless people up the priority list for vaccines, placing them on a par with the elderly and the chronically ill and reaching 300 in the first days of the drive.

"These people are among the most exposed to infection risk. It's hard for most of them to follow infection control measures," junior health minister Andrei Baciu told AFP.

Even as countries move forward with vaccinations, the death toll is ticking upwards, with an AFP tally reaching more than 2.45 million worldwide by 1100 GMT Saturday, with almost 111 million cases.

Despite the still alarming figures, it could be an uphill struggle to get some vaccinated as scepticism remains entrenched.

US President Joe Biden on Friday reassured people the shots were safe as he visited a Pfizer factory in Michigan.

"Please, for yourself, your family, your community, this country, take the vaccine when it's your turn and it's available. That's how we beat this pandemic," he said.

And with vaccines yet to reach the majority of people almost everywhere, countries continue to resort to familiar methods to limit infections.

Senegal's government said Saturday it would extend for a further month an overnight 9 pm to 5 am curfew, first introduced in early January in capital Dakar and the western Thies region.

Meanwhile French health minister Olivier Veran said he had asked a top local official to "toughen up" a curfew in southeastern city Nice and the surrounding Alpes-Maritimes department faced with rising cases -- or even return to a "partial or full lockdown".