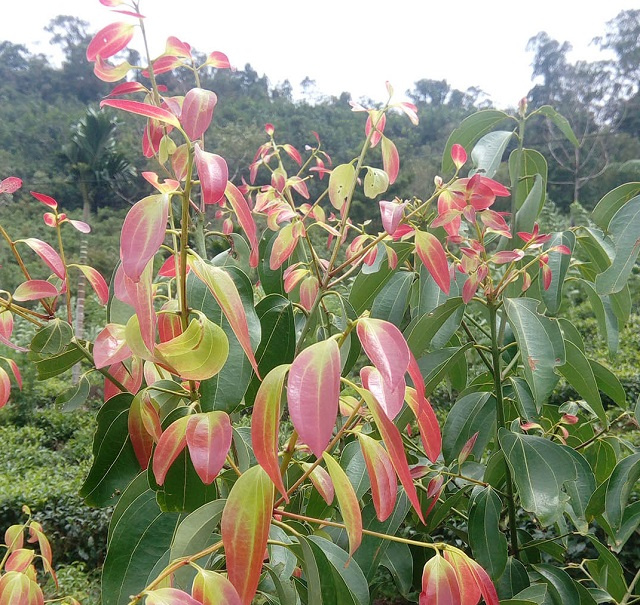 The President said that when you look up at the mountains where cinnamon grows abundantly, it is dollars you are looking at. (Backbone DM/Wikimedia) Photo License: CC-BY SA 4.0

(Seychelles News Agency) - Reviving the plantation industry through the exportation of cinnamon is one way that the Seychelles' government is looking to boost its economy.

President Wavel Ramkalawan made this declaration recently as he spoke to the national broadcaster on his first 100 days as the head of state.

Ramkalawan explained different ways that his government is working to restart the economy, which is on its knees due to COVID-19, as tourism is the main source of earnings for the 115-island archipelago in the western Indian Ocean. Fisheries and agriculture are two sectors to which the President said his government is giving special attention.

In addition to putting emphasis on Seychelles growing its own food, the President said that his government is seriously analysing the production and exportation of cinnamon on a large scale.

"Because, you see, when you look up at the mountains where cinnamon grows abundantly, it is dollars you are looking at. So, the government is looking at how to revive this industry so that cinnamon, the dollars in the mountains, can be exploited and exported and all of this will help to build our economy," he said.

Seychelles has a long history with cinnamon and the plantation industry, which was once the pillar and backbone of its economy. It was first introduced on the islands in 1772 by the order of Pierre Poivre -- a French naturalist who was the administrator of Mauritius and La Reunion.

But according to local historian Tony Mathiot, it was many years later that the island nation exported cinnamon which grew widely all over the islands. "Seychelles exported its first cargo of 740,123 kilos of cinnamon worth $3,700 to Germany in 1908. One year later 946,194 kilos of cinnamon were exported," said Mathiot. There were 68 cinnamon distilleries on the three largest islands, of Mahe, Praslin and Silhouette.

The historian added that "because of the growing consumption of cinnamon worldwide, Seychelles was exporting both essential oils and cinnamon bark to Europe and America. In 1951, 99,332 kilos of cinnamon oil fetched $162,000."

With the opening of the Seychelles International Airport in 1971 and a new focus on tourism, followed by the clearance of land for housing, the plantation industry lost its importance and started to dwindle in the early 1980s. To date, only a handful of people are still involved with the industry.

SNA spoke to owners of two local companies involved in the production and exportation of cinnamon bark -- Chaka Bros and Globarom -- who both said the reviving of the industry and the government support was long overdue.

Chaka Bros is the oldest exporter of cinnamon bark in Seychelles with experience since 1965. Both Ismael and Gafoor Yakub Chaka have welcomed the relaunching of cinnamon, which needed a boost.

Ismael said that in the days gone by it was cinnamon that brought foreign exchange to the banks of the island nation.

Gafoor on the other hand said that the company is still actively involved in exporting cinnamon and although “we have the usual challenges of cinnamon cropping and we often struggle in meeting our minimum monthly requirements for exportation."

"We are not getting enough and I now have to source out cinnamon from the other islands of Praslin and La Digue as well because I cannot get enough on Mahe. We only get a few gunny bags, which is not enough to fill a 20-foot container. I would like to export a container every time there is a ship leaving," said Gafoor.

Gafoor added that “being a 100 percent Seychellois company, all our foreign exchange earned with cinnamon comes back to the island nation, thus contributing positively to the country’s balance of payments.”

Mustafa Bristol said that the sustainability of the industry once relaunched is crucial. "We must ensure that a survey is done to establish to help us identify how much cinnamon there is and how many actors can be allowed to enter the industry so that everyone benefits."

Bristol explained that a lot of cinnamon forests have been cleared for development and whatever forests are left are very far and in uphill regions making the collection very difficult which requires substantial investment. The entrepreneur added that this is one of the main reasons why people are reluctant to venture into the business.

Bristol however admitted that labour remains the most important challenge for the industry. On this issue, the head of state said that the government will facilitate the process to bring in foreign workers to be directly involved in collecting the cinnamon bark.

In his 100-day interview earlier this month, President Ramkalawan said that his government is also looking at reviving the vanilla industry, which currently is being cultivated on the third most important island of La Digue.