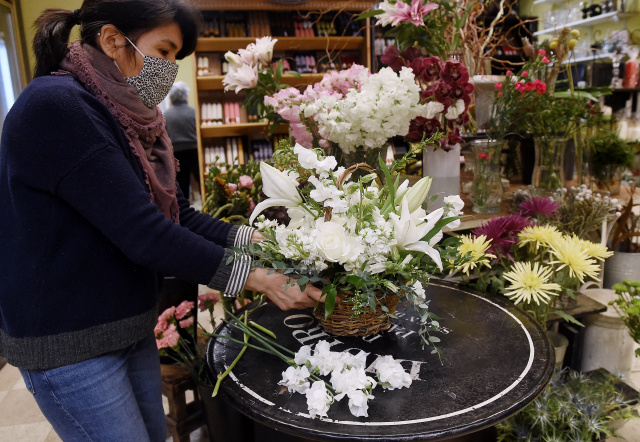 A woman makes floral arrangement for a funeral which the cause of death is unknown, amid the Coronavirus pandemic at a floral shop in Arlington, Virginia on February 22, 2021. US President Joe Biden will lead a remembrance ceremony to mark the dark milestone of 500,000 American Covid-19 deaths, but plans for easing the lockdown in Britain and a surge in vaccinations worldwide prompted growing optimism.(OLIVIER DOULIERY / AFP)

(AFP) - More than 500,000 people have died from Covid-19 in the United States since the pandemic began, according to Johns Hopkins University on Monday, by far the highest reported toll of any country.

The catastrophic US figure comes as some signs of hope are emerging in the world's hardest-hit country, with millions of people now vaccinated and winter's massive spike in infections dropping.

Still, the grim threshold was reached only about a month after the US recorded 400,000 fatalities from the disease in mid-January, with cases now on the decline but deaths continuing to mount.

The toll, 500,071, is more than double the number in absolute terms of reported deaths in Brazil, which has the world's second highest toll.

"It's terrible. It is historic. We haven't seen anything even close to this for well over a hundred years, since the 1918 pandemic of influenza," Anthony Fauci, chief medical advisor to US President Joe Biden, said Sunday on NBC's "Meet The Press."

After the first Covid-19 death was announced in the US in February 2020 it took about three months to pass the 100,000 mark, during a first wave that hit New York particularly hard.

Cases surged into the winter season which brought people indoors for holiday gatherings. The total reported number of known infections was over 28 million on Monday.

But deaths are still coming, and President Joe Biden last month warned that "well over" 600,000 people in the US could die from the virus.

According to the US Centers for Disease Control and Prevention (CDC), more than 61 million people have received at least one shot of vaccine in the United States, with some 18 million getting the full two doses.

Biden has made it a priority to get 100 million people vaccinated within the first 100 days of his administration.

Biden last week said the program to deliver vaccines into people's arms is as complicated as the already intense challenges of manufacturing them in huge quantities at speed.

But he said his 100-million-shot goal is on track to be easily surpassed, with a current average of 1.7 million vaccinations a day.

Biden said he did not want to give firm predictions of when the crisis will be curbed, but said that 600 million doses -- enough to provide the two-dose regimen to most of the country -- were expected to be ready by the end of July.

The president is expected to speak Monday about the latest toll, and he is to be joined by Vice-President Kamala Harris at sunset for a moment of silence and a candle-lighting ceremony.

Though concern has grown over variants of the virus, especially those that appear to spread more easily and render current shots less potent, officials sounded a hopeful note on curbing the virus.

"For those of us in the administration, the occasion makes us more determined to turn the tide on Covid-19 so the losses can subside and the healing can begin," White House coronavirus advisor Andy Slavitt said.

General » Be a reporter: Write and send your article » Subscribe for news alert
Tags: health, virus, US, toll