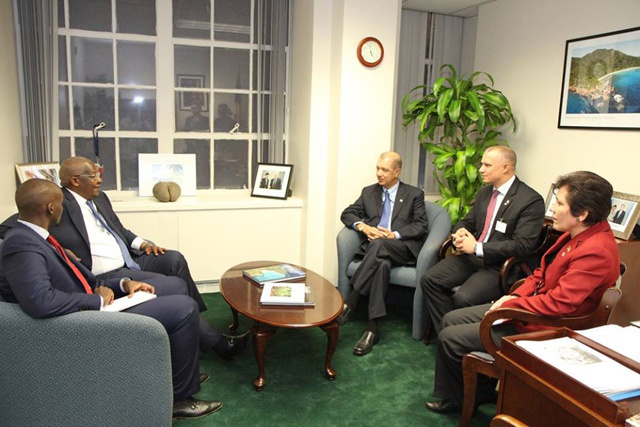 (Seychelles News Agency) - The Seychelles President James Michel has said he is hopeful that a legally binding agreement will be adopted at the conference of the United Nations Framework Convention on Climate Change (UNFCC) to be held in Paris next year.

“The UN Climate Summit has given a new momentum to the process of achieving successful climate talks that will be acceptable to all of us, small islands included, and I have much hope that we will reach an agreement in Paris next year,” said Michel in a press statement issued by State House this morning.

While in New York, the Seychellois head of state also held talks with EU, Commonwealth and UN partners where the concept of a Vulnerability Index for small island states and the Blue Economy concept were widely discussed.

Michel also had the opportunity to attend a reception hosted by the US President Barack Obama, and then a dinner hosted by the UN Secretary General Ban Ki-moon.

According to the State House statement the Seychelles President was among 20 selected heads of state for discussions on the way forward to the Lima and Paris climate talks.

Michel also attended the opening ceremony of the general debate of the 69th United Nation’s General Assembly yesterday which was opened by the Secretary General of the United Nations Ban Ki-moon.

On the sidelines of the UNGA he met with the new President of the 69th General Assembly of the UN, Sam Kahamba Kutesa, the Kenyan President Uhuru Kenyatta and the European Union Commissioner for Climate Action, Connie Hedegaard.

UNGA’s President who was formerly the Foreign Minister of Uganda discussed with Michel on climate change issues, sustainable development and the Blue Economy, as well as the issues affecting Small Island Developing States.

“The UNGA President also spoke to President Michel about the issues of women’s empowerment, rights and education, which will be important topics during his mandate, and commended Seychelles on its achievements in these areas,” read the State House statement.

With his Kenyan counterpart Uhuru Kenyatta, Michel reviewed the progress made in the bilateral cooperation programmes between their two countries that had already been discussed in August in the margins of the US-Africa Summit held in Washington.

Regional security and piracy, fisheries and tourism were amongst issues discussed.

According to the State House statement the two leaders expressed their satisfaction with the nature and progress of bilateral talks and agreed to further strengthen bilateral cooperation.

The outcome of the UN climate summit and the need for a legally binding agreement on climate change on the basis of expected temperature rises of no more than 2 degrees Celsius were further discussed when the Seychellois head of state met with the European Union Commissioner for Climate Action, Connie Hedegaard.

According to the statement they agreed that such a binding agreement was essential in the UNFCC conference in Paris.

Michel and Hedegaard also agreed that the Alliance of Small Island States (AOSIS) can play an important role in ensuring that the targets on carbon emission reductions remain ambitious and without further compromise.

The Vulnerability Index which was developed by the EU and the Commonwealth, which would help small island states to get a fairer deal within the global financing mechanisms, the Indian Ocean archipelago’s proposed debt-for-adaptation swap programme, which would enable SIDS Such as Seychelles to swap their debt for environmental conservation programmes, in an innovative way to fight climate change were amongst other topics brought up during the meeting.