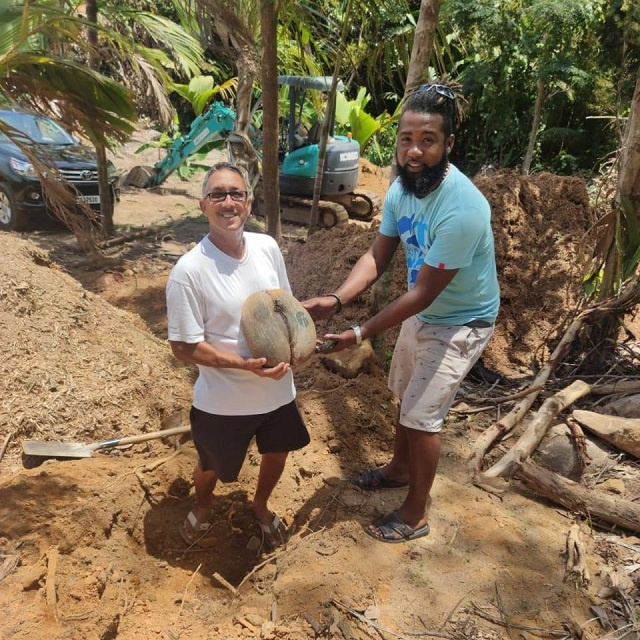 A person who has a coco de mer plant on their property is categorised as a coco de mer producer and is registered with the Department of Environment. (Seychelles Islands Foundation/Facebook)

(Seychelles News Agency) - A total of 96 coco de mer nuts have been planted on private property in Seychelles under a scheme developed by the Seychelles Islands Foundation (SIF) to further involve the public in its conservation efforts.

The coco de mer is the world's largest and heaviest nut, which when mature weighs between 15 and 30 kg. The species is endemic to Seychelles, an archipelago in the western Indian Ocean, and grows on Praslin and Curieuse, where SIF said the population is healthy.

The palm does not reach maturity until it us up to 50 years old. It is estimated to live over 200 years.

Through the submission of an application, a SCR500 ($28) processing fee, and meeting necessary requirements, a landowner in the island nation could apply to plant up to five coco de mer seeds on their property.

The Foundation’s operation and logistics manager, Julio Agricole, told SNA that to date 104 applications have been made - 94 of which are on Mahe, seven on Praslin and three on La Digue.

“All of the applications have been accepted. Since it takes six months to one year for coco de mer nuts to germinate, we are still waiting to see if the nuts planted are developing successfully in their new habitat,” said Agricole.

A participant in the scheme, Flolise Larue, told SNA that she and her husband wanted to plant coco de mer on their property as they want to be part of the propagation of this endemic species.

“It’s one of the most beautiful palms. The scheme is a great initiative and we have taken the maximum – five - that we were allowed as we have a large property. They have not germinated yet, but we are watching and watering them. We are hopeful,” said Larue.

She added that she always wanted a coco de mer plant near her house and was thinking about buying one around the same time that SIF launched the scheme.

Agricole added that with a couple of applications, the team had to reduce the number of coco de mer nuts that were being requested by the applicants as the land did not meet set criteria.

“Usually, we look for space availability. During the growth of a coco de mer tree, a juvenile tree may branch out leaves that can occupy an area of more than 10 square metres. We tend to avoid planting coco de mer nuts near to any infrastructure to avoid any inconvenience to the applicant,” said Agricole.

He said that the soil type in the area is also important as coco de mer usually grows in red, brown or dark soil with good drainage. This species of palm tree struggles to grow in areas of reclaimed, coralline or sandy soil along the coastline.

The team also takes a look at the terrain and land surface to ensure that the seeds are not planted with large glacis or boulders that would impair the growth of the nuts.

Due to the ongoing COVID-19 pandemic in the island nation, SIF has been forced to postpone all site visits and planting activities. The Foundation hopes to resume these activities as soon as the COVID-19 situation is under control.

Agricole said that once all pending applications have been completed, SIF will assess the scheme and check if there is still a demand from the public to plant coco de mer trees on their properties.