"Judges, magistrates and staff of the Judiciary must understand that they are servants of the people and not their masters" says Seychelles former chief justice 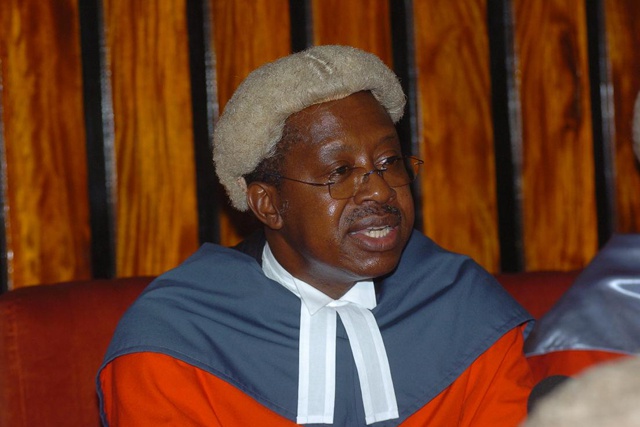 Frederick Egonda-Ntende left Seychelles at the end of August after serving for five years as the Seychelles Chief Justice. (Seychelles Nation)

(Seychelles News Agency) - At the end of last month, Ugandan national Fredrick Egonda-Ntende returned to his home country after serving as the Seychelles Chief Justice for five years.

He has since assumed his judicial office as a Justice of the Court of Appeal in Uganda.

SNA presents an email interview which Brigitte Mendes has conducted with the former Chief Justice of the Indian Ocean archipelago where he talks about his experience and accomplishments while serving his five year contract.

SNA: Justice Frederick Egonda-Ntende briefly describe your tenure here in Seychelles as head of the judiciary?

Frederick Egonda-Ntende: My tenure, a 5 year term, was a mandate of judicial and business reform in line with the aspirations of the Seychellois people and all who lived or had an interest in Seychelles as set out in the Seychellois Charter of Fundamental rights and freedoms. Prior to my assumption of office the Judiciary was suffering a crisis of public confidence. The Government, different opposition groups and the public were agreed on the need for reform but that is where the agreement stopped. It was incumbent on the Judiciary to redeem itself!

SNA: What are the major challenges being faced by the Seychelles judiciary?

Frederick Egonda-Ntende: First and foremost it is important that the Independence of the Judiciary be maintained. This is the main driver for public confidence and trust in the Judiciary. Secondly judges, magistrates and staff of the Judiciary must understand that they are servants of the people and not their masters. Courts exist to serve the public and not just to provide jobs to a select group. In all their actions it is important that this servant leadership or stewardship is taken to heart. This is an attitudinal issue. There has been some progress on this front but more needs to be done. Delay in hearing and determining cases continues to be a problem though there have been significant improvements, especially in the Magistrates Courts. There is still a significant backlog of cases that need to be cleared in the system especially in the Supreme Court.

SNA: How do you foresee the Seychelles judiciary in five years time?

Frederick Egonda-Ntende: It all depends on whether the progressive path we have travelled the last 5 years is maintained or not. If that path is maintained and built upon the Seychelles Judiciary will be in an enviable position in the region.

SNA: Being the third arm of the Government apart from the executive and the parliament, has there been a good working relationship among all three branches as far as enactment of laws?

Frederick Egonda-Ntende: Generally speaking the Judiciary has enjoyed a good working relationship with the other arms of Government. The executive and legislature were supportive of the major reforms in the Judiciary. Rightfully the other arms of Government were critical of the failures in the Judiciary too. I welcomed criticism of that nature as it enabled us to focus on the areas that needed improvement. Specifically with regard to the enactment of laws this is one area where more consultation would have been useful among the three arms of Government. Of course it is the duty of the National Assembly and the President to legislate and we do respect the separation of powers. However in areas where the Judiciary has some expertise and experience in dealing with the subject of legislation especially as regards the administration of justice such as sentencing prior consultation may have helped inform the process and would not in any case prejudice the separation of powers.

SNA: During your tenure one of your main challenges was to try and clear the backlog of cases. Does the backlog indicate that justice is being delivered at a slower rate, or is it just a question of lawyers using delaying tactics? What are the reasons for this?

Frederick Egonda-Ntende: First of all backlog is a general term that denotes that there are more cases in the system that have taken too long without being resolved. In order to tackle the backlog you need to specifically identify what cases can be classified as 'backlog' and what cases can be classified as 'current'. This is often done by establishing service or time standards for the life of a case in the System and thereafter making plans to clear the backlog while not allowing the 'current' case load falling into backlog. We did establish time standards and thus identify what was backlog and what was current. I sought the assistance of the Commonwealth Secretariat to support with 2 experienced judges to help us with backlog reduction who are now in position and are in fact tackling both the backlog and the current load in order to ensure that as we clear the backlog we do not encounter the current falling into backlog.

Of course the conduct of the legal profession has a significant impact on the progress of cases in court. If the bar or counsel are not prepared this leads to delay and waste of available resources. There are many reasons that create this scenario and it is important that the courts provide the necessary leadership in terms of firm but fair decision making to progress the existing case load.

Unfortunately Seychelles suffers from a perennial shortage of legal professionals. I have been informed that Barbados which is a country with a population of about 60 000 people has 600 practicing lawyers and 1000 accountants! Seychelles has less than 60 lawyers employed in both the private bar and public bar!

SNA: What were the main achievements in the judiciary during your five year tenure?

Frederick Egonda-Ntende: The Judiciary was able to regain public trust and confidence as a result of the growth in the independence of the Judiciary, and all the other reform efforts to increase the efficiency and effectiveness of the courts in the country. The Judiciary moved from the 19th Century to the 21st Century in terms of infrastructure and technology. Case Management Technologies as well as court room technologies were taken on board. Though it is not the responsibility of the Judiciary we consolidated the laws of Seychelles and availed public access to an electronic version via an online portal under the name of the Seychelles Legal Information Institute http://seylii.org . This was essential to make it easy first of all for the judiciary to be able to apply the law correctly. And the for both the legal profession and wider public including those interested in investing in Seychelles to each access to the law that governs their activities. We created an e-Grey book that was an electronic compilation of the most commonly referred to laws as a one stop centre for the judges, magistrates and the busy practitioners of the law of Seychelles.

We brought the stakeholders and other players in the justice system together to cooperate, communicate and coordinate their individual actions in the delivery of justice. Codes of conduct for the judges, magistrates and the bar were promulgated. Some effort went into attending to the public complaints in relation to the ethical conduct of members of the bar and the bench. The Judicial College of Seychelles was established following the success of several ad hoc training programmes to manage and coordinate the professional development of the judicial and non judicial officers as well as the legal profession.

SNA: What were your most memorable moments as head of the Seychelles judiciary?

Frederick Egonda-Ntende: There are many memorable moments but perhaps it is the opening of the Palais De Justice Building at the Ile Du Port that is symbolic of all our efforts in Seychelles.

SNA: Why did you decide not to apply for a second mandate as Chief Justice?

Frederick Egonda-Ntende: There was no advertisement of the post to which I could respond. You know in the first place I did not apply for the first term as such. There was no advertisement that I responded to. I was sought out. Secondly the appointment of a Chief Justice is done by the President on the recommendation of the Constitutional Appointments Authority which must act independently in determining whether there were exceptional circumstances for a second term to be offered to the incumbent.

SNA: Do you foresee Seychelles having a Seychellois Chief Justice in the future?

SNA: Do you have fond memories of the Seychelles?

Of course I do! I met some of the friendliest people in my life who were able to extend friendship and love to a lonely family on the island starting from St Paul's Cathedral, Victoria Market and elsewhere.  Visiting La Digue whether for one day or spending a weekend was always special. I was mesmerised by Silhouette too!
In terms of work without mentioning names I was supported by a number of staff members who really excelled at what they did and made it possible for us to transform the Judiciary in the manner that we did in spite of some serious obstacles, opposition and challenges.

SNA: Where and what is your new post that you have taken up?

I am a judge of the Court of Appeal of Uganda, an intermediate court of appeal, which also doubles up as the Constitutional Court. It sits in Kampala, the capital of Uganda.

SNA: How do you perceive this new challenge?

Frederick Egonda-Ntende: It is quite a challenge given the problems that afflict both the Judiciary and the country. Like all previous challenges I plan to give it my best, trusting the Almighty God, our Lord, our enabler, to see me through!

SNA: Do you have any words of advice for young aspiring Seychellois law students?

Frederick Egonda-Ntende: There is a great future awaiting them in the legal profession in Seychelles. Great opportunities to serve the people of Seychelles abound. Even the sky is no longer the limit. The limit will be their own ability and willingness to work hard or serve.

SNA: Which areas in your opinion, should students aim to train and practice law in Seychelles? E.g. environmental law, medical law, etc...

For the moment the students should study as many subjects as possible. Specialisation, if necessary, will come later after qualifying and joining the profession.

The Interview » Be a reporter: Write and send your article » Subscribe for news alert
Tags: Chief Justice, Frederick Egonda-Ntende