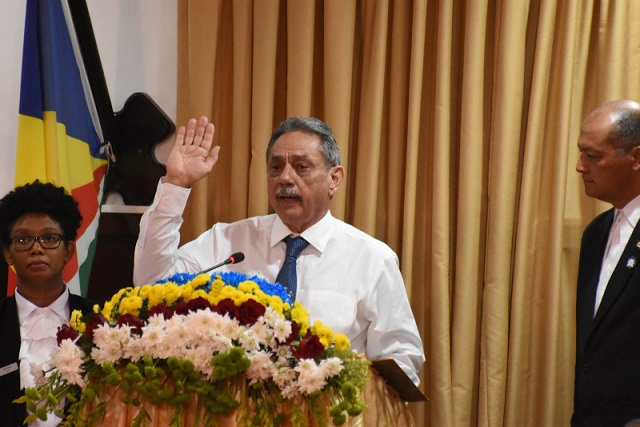 Roger Mancienne was sworn in as speaker of the new National Assembly in October last year. (Seychelles Nation)

(Seychelles News Agency) - Roger Mancienne was sworn in as speaker of the new National Assembly in October last year, becoming the fourth speaker of the country's parliament since the return of multi-party democracy in 1993.

Mancienne who is 73 years old, is also the leader of the Linyon Demokratik Seselwa (LDS) political party which won a landslide victory in last year's presidential and legislative elections.

SNA met with Mancienne to get his views on his new role in the National Assembly and his party's political future.

SNA: How has it been so far at the helm of the country's legislative body?

RM: Apart from the regular interruptions we've had due to COVID-19, our work has gone well. We have been able to do everything that is required of a parliament, that is to question the government's work through its ministers, listen to the government's proposals through the State of the Nation address and budget address.

We have also debated, amended, approved, and passed bills and listened to motions tabled. What makes these four months remarkable is the fact that the State of the Nation Address and the budget address were presented soon after each other - these are two big items on the parliament's agenda. Normally they are presented at separate intervals.

SNA: How has this experience been for you personally?

RM: I have always followed the work of the National Assembly, so I was engaged to some extent. It is not entirely strange to me. Being involved in its daily operation is another experience altogether and many people have asked me whether it is stressful or difficult.

It is not difficult. But it is stressful because of public exposure. Everything is done before the camera and some of the sessions are very long and this can be stressful. But there is nothing extraordinary.

SNA: Because LDS holds a majority in parliament, which leads to criticism of you being biased, is it easy to have control over all the members and to be neutral as speaker?

RM: No, I try my best not to be biased. So, I hope I am not accused of being biased. Regarding control over the members, yes this is a necessity. For a speaker, the most important word is balance. You need to understand how to balance a member's right to speak freely. Let us not forget that parliamentarians enjoy immunity in the Assembly which allows them to speak freely about an array of issues. As speaker, I must respect this.

On the other hand, there is a need to look at the kind of statements members are making. There is a limit that needs to be observed on both sides.

As speaker, I must find that balance between allowing them to speak freely but at the same time be respectful while doing it.

One concern raised so far is what kind of language should they be allowed to use. Should the same language use at home or on the streets be allowed in parliament? Or should we adopt a more formal way of speaking for institutions such as parliament?

We should look at the latter. We recognise that Creole is a colourful and interesting language where people can use all sorts of expressions when talking but there should be a limit as to what type of language is allowed.

Secondly, how do they address other members and it has happened in the past where people who felt they aggrieved by what a member had said, have had their right of reply, which is also allowed.

So, I must balance things out. Is the right of reply justified, or did the member express himself or herself freely or should the member have exercised caution while speaking? These are some of the concerns.

SNA: Now that your party, LDS, is in power. What is the future of this coalition?

RM:  It was never a question of coalition. If you would recall, LDS did not come about by the merging or coalition of the different parties. But it was rather the leaders of all the parties that came together to create a new party.

So LDS did not depend on the parties that existed. It was rather their leaders that joined forces to create LDS. The structures of the other parties were never in question within LDS.

LDS functioned as a party. Of course, when we started there was a need to look at all the members, our representation in terms of the different political parties, and each person's role within the party. That was why we agreed that each party should have a proportionately elected member in the previous parliament.

Since then, LDS has been autonomous, without any link to these parties. And now we need to see whether there is any role for the previous parties. During the past five years, we saw that they had a role to engage with the electoral commission and push mainly for electoral reforms.

But now they should see whether they have any role to play in the future or if they should exist as a political party.

SNA: There were harmony and unity at the beginning among all the leaders. Does it still exist?

RM: The fact that it is one party, with no consideration whether you are from Lalyans Seselwa or SPSD or from Philippe's Boulle's grouping, I would say this is not an issue. It does not affect the functioning of the LDS or that of the National Assembly. If you would recall for last year's election, all candidates stood as LDS candidates.

SNA: How are the decisions being taken now within the party?

RM: We still have our executive council. We have not been meeting as frequently as we would have liked due to COVID-19 as it is difficult to find a room that is big enough to accommodate us.

But we still function as a party.

SNA: There are concerns that the Seychelles National Party has engulfed the other smaller parties and is now in total control of LDS. Is this the case?

RM: No. SNP has always been the main opposition force and of course, when LDS came about, SNP had a bigger presence within LDS. From there LDS has continued as an individual party and not as the grouping of all the other parties.

I was an individual that presented myself as a member to set up the party. There were other officers of the party. Of course, when we chose our leader of the opposition for the sixth parliament, we created a political focus, as he became the one that led the party's political agenda in the assembly.

And after winning the presidential election in the 2020 election, of course our people within the executive have taken the party's political leadership. And we have accepted this within the structure of the party as we do not want to compete with the executive.

The executive is there to establish the basis of our philosophy and policies so that our parliamentarians can follow. The final fundamental exercise that we did as a party was to prepare our manifesto for the election and this is what is presently guiding the work of the executive and the national assembly.

SNA: You have been the leader of LDS since 2016. Will you remain as leader and what is being done to re-invigorate the party?

RM: There will definitely be a convention. In fact, we should have been preparing for one at the moment but as I mentioned this is impossible due to COVID-19. It must be done as soon as the health situation permits, as this is stipulated in our constitution.

There is a deep reflection taking place within the party as to what type of leadership we should have in the future and what will be the role of the president of the party. We are pondering over several issues.

Our constitution needs to be revised at the upcoming convention to relook at the structure of the party so that it reflects what is happening presently.

I personally do not know what role I will have within LDS in the future. This will depend on the type of structure we adopt and how best we fill the roles that exist.

SNA: Do you think that President Wavel Ramkalawan should lead the party?

RM: That is a very good question. We need to look at it carefully. There are two sides. Firstly, if the president leads the party, it will complement his role as the head of the executive, thus political leadership in the country.

Secondly, will this have a negative impact on his role as president for all Seychellois? This should be given due consideration. It could happen. I am not saying that he would not be able to lead LDS and remains as the unifying figure as head of the country and do well in both roles.

But we need to have a deep discussion on the matter. Whether the party should have its structure and remain in charge of the political base, and that the president stays outside of it.

SNA: Many people are sceptical about whether you will be able to complete your five-year mandate due to your age. What is your comment on this?

RM: I feel I can complete my five-year term but if there is a need to step down for health reasons then I will not hesitate to do it. I don't know what the future holds but I keep an open mind.

The Interview » Be a reporter: Write and send your article » Subscribe for news alert
Tags: National Assembly, Linyon Demokratik Seselwa