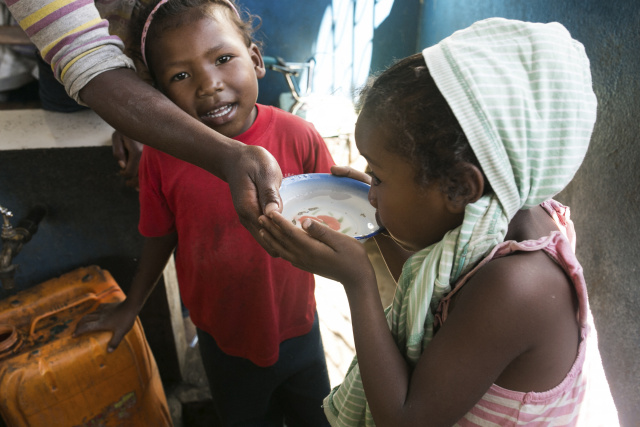 A young girl drinks water from a bowl at a public fountain during a period when the public water supply has been cut off, in the Isotry district of Antananarivo, Madagascar on March 17, 2017. As usual, they get up before dawn and, one by one, place their cans in a neat row at the base of the water pump, ready for another long day of waiting and carrying.For the water carriers of Antananarivo, the capital of Madagascar, distributing water is a daily physical struggle that has been worsened by regional drought and climate change. (RIJASOLO / AFP)

(AFP) - Over 4,000 children have been hospitalised for malnutrition in southern Madagascar this year due to severe drought, Action Against Hunger said Thursday, as food insecurity spirals in the most vulnerable parts of the country.

The Indian Ocean island nation is grappling with the effects of three consequence years of below-average rainfall compounded by the coronavirus pandemic.

Most of the impact is felt in the impoverished Grand Sud region, where the majority of the population survives off agriculture.

Global charity Action Against Hunger on Thursday warned that more than 4,000 malnourished children under the age of five had been admitted to its mobile health centres in Grand Sud so far this year.

That figure is more than double the number recorded over the same period in 2020, when food insecurity was already widespread.

"This is a humanitarian emergency where children will die if we do not take them into our care," Action Against Hunger southern Africa operations director Valerie Ceylon said in a statement.

"We are currently one of the few actors present on the ground to support local health authorities," she added.

While southern Madagascar usually faces a yearly hunger season, Ceylon noted the current situation was "much more serious than other years".

Lack of rain caused households to run out of food stock as early as September 2020.

Deforestation has meanwhile increased the intensity of sandstorms that have destroyed crops, undermining agricultural production for the year ahead.

Action Against Hunger said its teams on the ground had observed "desperate feeding practices" such as eating clay and unripe mangoes, and called for more funding.

The UN's World Food Programme in January appealed for emergency aid of $35 million (29 million euros) to fight the hunger crisis.