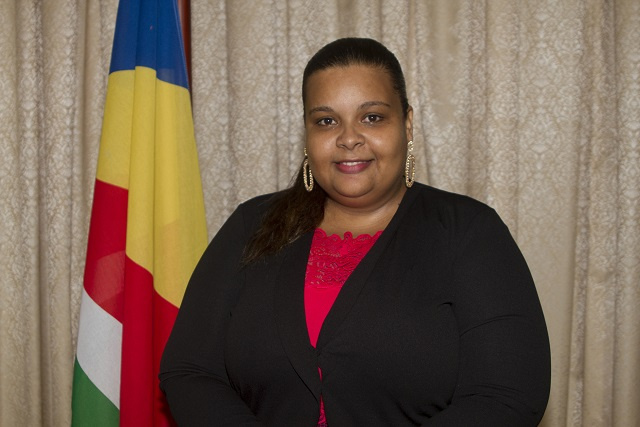 Angela Servina has broken the glass ceiling as the first woman appointed as the chief executive of the island nation's Planning Authority. (State House)

(Seychelles News Agency) - International Women's Day is commemorated on March 8 all over the world as a celebration of women and their achievements. Seychelles – 115 islands in the western Indian Ocean -- is known as a matriarchal society with independent women assuming different posts, even those traditionally associated with men.

Angela Servina has broken the glass ceiling as the first woman appointed as the chief executive of the island nation's Planning Authority - the authority regulating the construction industry and uses of land in Seychelles.

SNA speaks with the mother of two, who has proven that hard work and determination can lead to success.

SNA: Tell us a bit about yourself, your background, about your family in general.

AS: I am 36 years old and come from the Anse-Boileau district where I grew up with my sister. My mother was a single mother and our grandparents looked after us when she had to work. My father had to flee from the country because of the politics of the country at that time. I was only 3 years old when he left for the United Kingdom. Today, I am a single mother with two sons, one is 19, the other is 6. I am a pretty simple person who values family and cares deeply for my loved ones.

Some people would describe me as someone with a strong personality and perhaps this is true. I am someone who believes in doing things the right and fair way. From as far back as I can remember, I have always been someone who speaks up for what I believe in.

SNA: Tell us about your education.

AS: After doing my A levels in French, History and Geography at the Seychelles Polytechnic, I qualified for a fully funded government scholarship. But I spent two years as a supplementary teacher at the Pointe Larue Secondary school before proceeding to university in South Africa in 2007. My intention was to follow a degree course in Tourism Marketing but upon reaching university I found out that the course was a diploma one and hence I changed my mind. One of my colleagues had already registered for a degree in Geography and I decided to enrol in the same course. Geography was something I was familiar with and I figured I could later specialize in a particular branch. I excelled in the course and eventually graduated with a degree with the highest honours.

SNA: Tell us about your career path.

AS: In January 2010, I was hired for the post of acting senior planning officer in the Land Use and Strategic Planning Unit of the Planning Authority. At the time, the authority had really been hit by the voluntary departure. There were about 30 staff employed, if not less. The mandate of the authority was also seriously under threat due to budget constraints. But I found my way through the difficulties and learnt as best I could.

In March of 2010, the chief executive officer called me in and informed me of his intention to put me on the Planning Board as secretary. I had no notion of what this responsibility would entail then, but I agreed. I attended several meetings, observing and taking notes before finally taking over as the permanent secretary and along with my other duties in the land use unit. I also delivered the duties of the planning board secretary in preparing minutes of meeting, communicating decisions to clients, preparing board meetings and visits. Each time the board got re-appointed I was also re-appointed as secretary.

From 2012 to date, I served in the following posts as the head of the Land Use Section, senior planning officer, principal planning officer – a post I held, until my recent promotion in February this year.

SNA: Give us an overview of your current job.

AS: I would describe the place similarly to being the head of a household where you have to care for everyone and think of everyone's well-being and plan so for the household to run well and thrive.

In summary, it involves leading the secretariat of the authority, budgeting for the authority, authenticating decisions of the board, acting as the bridge between the board and public, offering advice and solutions to more complex projects to staff, ensuring a high team spirit and direction for the authority and ensuring quality service, which is delivered in a timely manner, for the public. Most tasks are not new. It's only the responsibilities that are more and the pressure is also definitely more acute.

SNA: What is it that you are bringing to the authority?

AS: I wish to bring in fresh ideas and some restructuring where necessary to improve on our areas of weaknesses. A lot of work has already been done to improve the authority's work and I am glad that I got to be a part of this. But now, I have a young team of Seychellois professionals at my disposal and I intend to use their knowledge and ideas to further enhance the Authority.

SNA: What are the challenges faced by the authority?

AS: In terms of operation, we are stuck with an outdated law (The Town & Country Planning Act 1972) we need to have the Bill to replace the same reviewed and represented to the National Assembly for endorsement. We are encountering a lot of issues in regards to clients and contractors who keep breaking the law by undertaking illegal development or not about necessary provisions of the law. The fines to deal with these are way too low and does not deter the lawbreakers.

Similarly to other government agencies, we have suffered budget cuts, due to the current economic crisis. Some parts of our operations could be affected but we are doing our best to spend wisely and still identifying areas to make necessary savings. But we are looking at some possible alternative financing from some of our foreign partners. Lastly, one of our main challenges has to do with the perception or should I say lack of education on the part of the public vis a vis the mandate of the authority.

Since taking office, I have noted that the authority gets dragged into a lot of personal conflicts between neighbours, which takes up a lot of our resources and time and which does not necessarily have much to do with us. In addition, the authority is too often blamed for a lot of issues falling outside its mandate. I believe that we will have to launch a public education campaign in that regard. I think that we should be commended for being one of the first government agencies in Seychelles to become fully digital in terms of our operations. This is why most staff can now work from home at the moment. All applications are submitted via an online platform which are then also circulated digitally to our referral agencies for comments and considered in our online weekly meetings. Decisions are also communicated via e-mails and both clients and agents can follow-up with their plans via the agent's online account. Even the plans are now authenticated electronically.

To end, I can say that I am excited to take on this new challenge in my career. I see it as a progression and I certainly aim to make a difference where I can and bring a little personal touch, to our interactions with our clients.

SNA: And on a last note, a message to the girls out there?

AS: Stay focused on your studies and work hard to achieve your dreams. Always know your priorities and stay focused on them, in reaching the end product. Remember that nothing is impossible in life, especially if you have the determination and count on God's guidance and blessings.

The Interview » Be a reporter: Write and send your article » Subscribe for news alert
Tags: Planning Authority