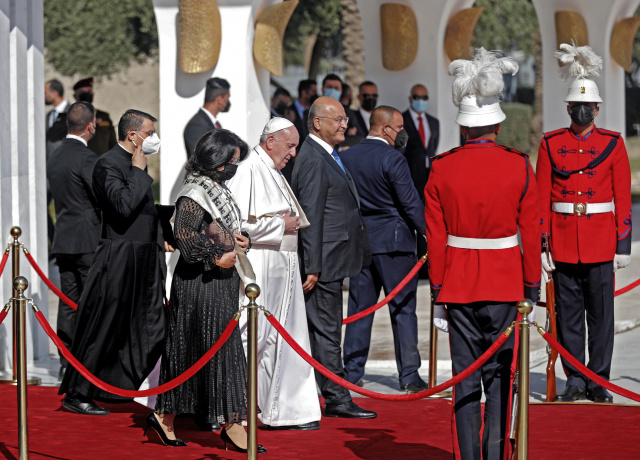 (AFP) - Pope Francis concluded on Monday the first-ever papal trip to Iraq, which went off without a hitch despite security worries and a second wave of coronavirus cases in the country.

The 84-year-old pontiff covered more than 1,400 kilometres (900 miles) inside the country, bringing encouragement to its diminished Christian community and extending a hand to Shiite Muslims by meeting top cleric Grand Ayatollah Ali Sistani.

"In my time among you, I have heard voices of sorrow and loss, but also voices of hope and consolation," Francis said on Sunday, concluding his last public event.

"Now the time draws near for my return to Rome. Yet Iraq will always remain with me, in my heart."

In his packed three full days in Iraq, the Pope made more than a half-dozen speeches in nearly as many cities, repeatedly evoking hope and fraternity.

In Baghdad on Friday, he called for an end to violence and extremism and urged officials to do more to fight corruption.

Francis called the minority Yazidis "innocent victims of senseless and brutal atrocities," following the Islamic State group's rampage against their esoteric community in 2014.

He also met members of Iraq's other minorities in a moving interfaith ceremony at Ur, where the Prophet Abraham is thought to have been born.

On Saturday, he held an extraordinary meeting with the reclusive but highly respected Sistani, who afterwards said Iraq's Christians should have the right to live in "peace."

Francis' full day in Iraq's war-battered north on Sunday embodied a cause close to his heart -- supporting traumatised Christians.

There, he said the "tragic" exodus of Christians "does incalculable harm not just to the individuals and communities concerned, but also to the society they leave behind".