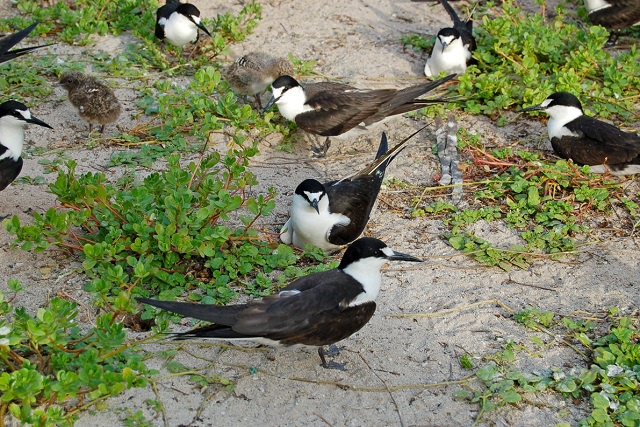 The sooty terns are found in large colonies on the Seychelles islands of Bird, Aride, Desnoeufs, Farquhar and Cosmoledo. (Gerard Larose, STB)

(Seychelles News Agency) - A gust of wind whips across the flat coral surface of Bird island, ruffling the distinctive black and white plumage of some 700,000 birds crouching in the scrub. It is the end of a particularly difficult nesting season, and the adult birds keep a wary eye on their fluffy grey chicks as they cautiously explore their new surroundings.

British ornithologist Chris Feare has been travelling to the northernmost island in the Seychelles archipelago for the past 43 years to study the sooty terns of Bird Island and the birds are now his long-time companions.

Since he was first sent over by the the UK Natural Environment Research Council (NERC) in 1971 to assess their numbers, a lot of things have changed since the seventies, such as easier access to the island thanks to the conservation-friendly owners of the private island and new technology to study the birds with.

Lately, the professor has been using tiny GPS geo-locators in a study sponsored by the British High Commission in Seychelles to track the movements of the nesting birds while they are foraging for food, which has revealed both incredible and worrying findings.

Professor Feare and his Seychellois friend and research assistant Christine Larose found that a crippling food shortage in the second half of July meant that the birds, which went out in search of food while their partners incubated the eggs on their nests, had to spend increasingly long periods of time foraging, leading to many of their partners abandoning their nests out of hunger and desperation.

According to an article published on Monday in local daily newspaper the Seychelles Nation, two of the tagged birds made incredible two thousand kilometre trips to look for food, one heading west towards the East African coast and another flew to the north-east for 800 km before retracing its steps and heading back to Bird Island.

One thing that hasn’t changed since the seventies is people’s appetite for sooty tern eggs. Considered a seasonal delicacy enjoyed by locals and foreigners alike, the speckled eggs known locally as 'dizef zwazo' are harvested from the birds’ nests annually between June and July when the nesting season begins. The harvest is met with great demand, both on the islands and for the export market.

The black-backed terns, known as Golet in Creole, can be found throughout tropical regions of the world’s oceans and is the most abundant seabird to be found in the Seychelles, with an estimated three million pairs, each coming to lay a single egg every year. In addition to Bird Island, large colonies are also found on Aride, Desnoeufs, Farquhar and Cosmoledo.

For many years, the eggs were collected excessively, resulting in the demise of entire colonies. Today, egg-collecting is strictly controlled by the Ministry of Environment and Energy with the help of the Islands Development Company.

Sooty tern populations are now carefully studied and monitored, which led to the discovery that if eggs are collected early on in the breeding season, it was possible that some females might lay a second egg.

But Feare, whose research on the sooty terns in Seychelles is unparalleled, is still not entirely satisfied with the collection methods employed at present, saying that although numbers on Bird Island were stable, the colony on Aride had shrunk and the remaining colony populations on far-flung islands were not sufficiently monitored.

The professor has been working since 1993 to build up data to understand the entire life cycle of the birds and the impact the annual egg collection activities have on their survival.

“My recommendation in 1997 was that each year a half of the Bird Island colony, or half of Desnoeufs, could be harvested with a reasonable chance of the harvest being sustainable,” he told SNA in an email interview.

Currently, however, Feare says that harvesting is allowed on both islands simultaneously, which concerns him greatly.

“Insufficient monitoring is taking place across all Seychelles colonies to detect whether this is affecting populations. With such a long-lived bird - we have had a 38 year-old - there could also be a delay in population declines becoming apparent,” he explained.

Poaching of eggs is also a reality, although no-one can for certain define the extent of these illegal activities.

“There certainly is a problem on some islands but by its nature we do not know how significant it is. I understand that Aride now has military support to try to prevent poachers coming ashore but this is not a realistic option on smaller islands or the more remote islands in the Amirantes and Cosmoledo,” noted Feare.

“In addition to eggs, poachers apparently kill adults as well, which is much more serious in population terms.”

Months on the wing

The data the professor gathered over the past 25 years or so largely supported the ornithologist’s assumptions, except that the mortality of the hatchlings in their first year was greatly underestimated.

Professor Feare hopes incorporating the geo-locators into his research will shed light on other factors that affect Seychelles populations, such as changes in the ocean, upon which the birds depend for their food.

The GPS devices are attached to the two central tail feathers using a strong adhesive tape, however, all ten of the birds managed to preen them off after about six days, jettisoning $6,500 worth of tracking equipment into the depths of the ocean.

Through Feare’s research it has been established that the birds spend the many months between the nesting season in the air, without ever making landfall. This means that the remarkable birds, which are unable to float in the sea, travel considerable distances without tiring and are even able to fall asleep on the wing.

The professor says that long-term cooperation with marine scientists and other experts is necessary to discover the cause behind the food shortages and whether or not it is an isolated event or an indication that climate change was going to make life much harder for the nesting sooty terns.

“The birds depend on tuna to drive their small fish and squid prey up to and out of the surface waters, making them available to the birds. It is possible that for some reason tuna migrated away from Seychelles, or there might be a climatic explanation,” he said. “Interestingly, this year one of the birds’ normal foods, small squid, were entirely absent from the diet.”

Tropical oceanic birds such as the sooty tern do experience food shortages from time to time, according to the professor, but he says their long life spans buffer them against occasional breeding failures, which was previously seen in 1994.

“In 2008 we recorded long incubation shifts and from then to 2013 it was apparent that Bird island’s Sooty Terns were not undertaking early morning departures to the south to feed, which has been their norm for most of the 1990s and the early 2000s,” he said. “Instead, they were heading out over the deep water.”

Whether this was a temporary anomaly or an ominous portent of the impacts of climate change remains to be discovered.

An egg a day may keep the doctor away, study claims