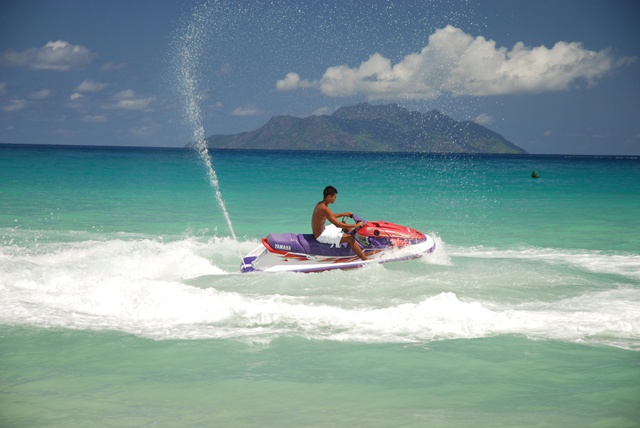 The revised legislation, according to SMSA, will particularly focus on jet skis or water scooters, which are relatively new in Seychelles and getting increasingly popular. (Gerard Larose, STB)

(Seychelles News Agency) - The Seychelles Maritime Safety Administration (SMSA) has said that ongoing revision of some of the island nation’s maritime laws will help to ensure that there is a database of all boats especially private ones going around in the Seychelles waters.

The Director General of the Seychelles Maritime Safety Administration (SMSA) Captain Joachim Valmont, said this in an interview with SNA this morning.

There have been growing concerns over the years regarding the safety of people while on the beach or at sea and this was further highlighted last Saturday when a 54 year old man was admitted to the Seychelles hospital with a broken leg after being hit by a boat while he was swimming.

According to SMSA aside of reviewing some legislation, a maritime police unit is also being set up to assist swimmers in difficulty and issue advice on any potential hazards.

Valmont noted that laws such as Control of Hire craft Act, which regulate operations of various categories of boats, for instance prohibits dumping of wastes at sea, do not go far enough.

Under the Merchant Shipping Act, it is not mandatory for any vessel under 24 metres long to be licenced unless it is engaged in some commercial activity such as fishing or tourism.

"It is possible therefore that there are hundreds of pleasure boats not officially registered," he said.

Valmont  said a legal committee has, since three months, been reviewing the pieces of legislation and it is envisaged to make registration compulsory for all boats, which shall be identified by a number.

"This will help us maintain a data base of all boats in Seychelles, especially private boats," he said.

The revised legislation, according to Valmont, will particularly focus on jet skis or water scooters, which are relatively new in Seychelles and getting increasingly popular.

It is hoped to introduce certification, following training for jet ski operators.

Valmont said they are hoping that the revised legislation will be ready by mid-2015.

On the issue of insurance for seacraft, he told SNA that this is up to the boat owners and insurance companies.

"Many private boats are already insured. The SMSA certainly hopes that all vessels have insurance cover to protect the owners and passengers.”

Being an island nation which boasts idyllic white sandy beaches it is not uncommon to see visitors and Seychellois enjoying a day by the seaside with family and friends.

According to Valmont the Beach Control Act sets limits for swimmers, up to 120 metres from the high water mark.

He explained that this demarcation- by yellow buoys- is already in force at the popular Beau Vallon beach in the northern part of the main island of Mahé; Anse Royale in south Mahé as well as Anse Lazio on Praslin.

At Beau Vallon , where three swimming areas have been demarcated, there are also two boating channels between them, to allow vessels to go up to the beach to embark or disembark passengers, are also demarcated- by red and green buoys.

The demarcation, SMSA says, will soon be extended to Port Launay.

Some popular beaches, such as Beau Vallon, Anse Lazio as well as Cote D'Or on Praslin also have lifeguards with rescue boats. These are manned by the Fire and Rescue Services and overseen by SMSA.

Valmont said however that since Seychelles boasts hundreds of beaches just on the main islands of Mahé, Praslin and La Digue, it is not possible to demarcate each one or even have lifeguards stationed there.

The buoys each cost over $1,500 plus accessories, installation and maintenance.

"There is the question of individual responsibility. Like on the motor roads, it is up to every user to act in a responsible manner," noted Valmont.

He also said more signboards are being erected near beaches where there are known safety hazards, such as strong currents. Two have already in place at Grand Anse Mahé, on the western coast of Mahé. Five more are being put up including at Anse Coco, on the third most populated island of La Digue, a beach which is popular amongst tourists.

The SMSA plans to have up to 20 warning sign boards at the different coastal areas on the main islands.