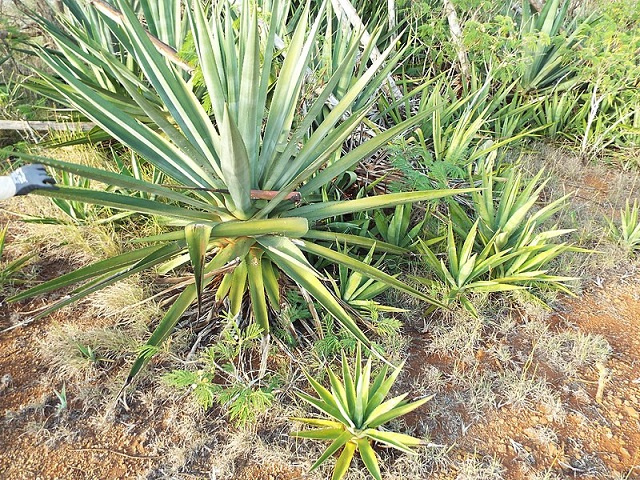 Sisal or agave sisalana is one of the invasive species that has been eradicated 40 years after eradication efforts started on four islands in the Aldabra group. (Forest & Kim Starr, Wikimedia Commons) Photo License: CC BY 3.0

(Seychelles News Agency) - The Seychelles Island Foundation (SIF) can now respond to invasive alien species on the remote Aldabra Atoll thanks to a grant of $118,000.

Through the grant from the European Union and Organisation of African, Caribbean and Pacific States under the Biodiversity and Protected Area Management (BIOPAMA), the foundation will be able to strengthen biosecurity measures between Mahe and Aldabra.

Emeline Lafortune, project officer of SIF, told SNA that implementing strict biosecurity procedures across all pathways will put Aldabra in the best position to improve its conservation status and maintain the results of previous eradications.

"With Aldabra being a biodiversity hotspot, the unique species found there are specifically vulnerable to the introduction of invasive alien species, being one of the most important drivers of biodiversity loss on islands. Preventing the incursion and establishment of further invasive alien species on Aldabra Atoll is fundamental to its protection and much more cost-effective than a later eradication, which is often near impossible," said Lafortune.

The project covers procedures at the point of departure, which is the main island of Mahe, throughout the whole pathway to Aldabra.

"The project's objective is to strengthen biosecurity measures to ensure adequate quarantine facilities and to fully institutionalise biosecurity management to implement the Aldabra Atoll management plan from 2016 to 2026," continued Lafortune.

There have been recent devastating impacts from the spread of yellow crazy ants in Seychelles especially on the wildlife of the Vallee de Mai, one of the island nation's  World Heritage sites on Praslin which is managed by SIF. Due to the repeated encounters of these ants at different loading sites of the Aldabra supply boat, SIF feels there is an urgency to tighten biosecurity measures and increase its capacity to prevent unwanted species from travelling to Aldabra.

These invasive species "are one of the most important drivers of biodiversity loss on islands. The Pacific Invasive Ant forum estimates invasive ant eradications on islands costs $19,000 per hectare to implement. Aldabra's terrestrial area is 15,500 hectares large, having to deal with an ant eradication would require incredible finances - $293 million," she added.

The proposed action will support SIF's determination to ensure the greatest possible protection of Aldabra's native flora and fauna and maintain its outstanding universal values in a world where native species and biodiversity hotspots are in severe decline.

Aldabra is one of the world’s largest atolls and home to a population of endemic giant Aldabra tortoises which fluctuates to around 100,000, more than the 98,000 population of Seychelles, an archipelago in the western Indian Ocean.

The atoll is 34 km long and 13 km wide with a large and shallow lagoon covering an area of 196 square kilometres larger than the island of Mahe.

SIF implemented an extensive four-year project from 2011 to 2015 funded by the European Union to address the problem of invasive species in the two World Heritage Sites in Seychelles, an archipelago in the western Indian Ocean.

In 2012 after an intensive period of tracking, the last feral goat was eradicated from Aldabra. This marked the end of the feral goat inhabitation on Aldabra and the completion of an eradication programme that lasted for more than a quarter of a century. Rats and cats are two other species the foundation is looking to eradicate on the atoll.

Sisal, or agave sisalana, is another invasive species that has been eradicated 40 years after eradication efforts started on four islands in the atoll group.

General » Be a reporter: Write and send your article » Subscribe for news alert
Tags: Biodiversity and Protected Area Management, COVID-19