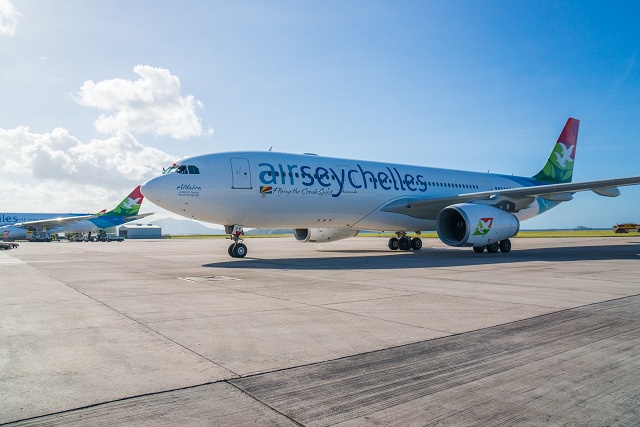 (Seychelles News Agency) - The Seychelles national airline, Air Seychelles, has reported a 20 percent increase in its revenue for the first half of 2014 compared to the same period in 2013.

According to a press statement issued this afternoon the airline says it “posted total revenues of US$50 million up from US$42 million in 2013.”

Air Seychelles says passenger numbers increased by 25 percent as 184,101 passengers flew with the airline from January to June this year compared to 146,980 passengers for the first six months of 2013.

The airline’s Available Seat Kilometres, which is the measure of an airline passenger-carrying capacity, rose 46 percent during the first half, with an average seat occupancy rate of almost 60 percent across its current network of five destinations – Paris, Abu Dhabi, Mauritius, Johannesburg and Hong Kong.

The seat occupancy rate rose to an acceptable 73 percent after the seasonal slump during the first quarter.

Air Seychelles was established in 1977  and adopted its present name in September 1978. Between 1978 and 2012 it was wholly owned by the Seychelles government but in 2012 the UAE's Etihad Airways bought a 40% share in the airline, investing $45 million in Air Seychelles.

According to the Air Seychelles statement its codeshare agreement with Etihad Airways has seen a significant expansion in the first half of the year with Amman, Dammam, Jeddah, Riyadh, Rome, Seoul and Zurich added to its new total of 28 destinations around the world.

The island carrier’s connections have been opened to even more new tourism source markets with the total number of weekly codeshare connections rising from 297 to an impressive 566.

Air Seychelles’ route between the main island of Mahé and the second most populated island of Praslin remained the busiest of all, with almost 72,000 passengers travelling between the two islands in the first half of the year.

The second highest traffic was seen between Mahé and Abu Dhabi with nearly 50,000 passengers carried, with a year-on-year increase of 90 percent.

The airline’s domestic cargo services, which only commenced dedicated services in April this year, also saw 13.2 tonnes of goods transferred between Praslin and Mahé.

Air Seychelles Chief Executive Officer Manoj Papa has attributed the growth in the company’s revenue, passenger and cargo figures “to the continued success of our business model, our partnership with Etihad Airways and the hard work and dedication of our staff.”

“Overall it continues to be a tough operating environment for many airlines, but we are confident our strategy will continue to allow us to drive quality revenue, enhance the guest experience, while being a catalyst for boosting trade and tourism into Seychelles,” said Papa.

The national airline has already announced an expansion of its regional network as of December this year as it starts flying to the Indian metropolis of Mumbai, Dar es Salaam in Tanzania and Antananarivo in Madagascar.

The Chairman of the Air Seychelles Board, Joel Morgan, who is also the archipelago’s Minister for Home Affairs and Transport, said the results “demonstrate the airline’s turnaround success story, which has seen us widen and deepen our partnership with Etihad Airways and other airlines, while significantly expanding our customer offering throughout 2014.”

In April this year, the Seychelles national airline Air Seychelles announced its second successive year of net profit, raking in a total of $3 million, almost three times more than the $1.1 million net profit recorded in 2012, a pattern Papa is determined to repeat for the third successive year.

“Air Seychelles is therefore focused, and we are on track for a third year of profitability,” adds Papa