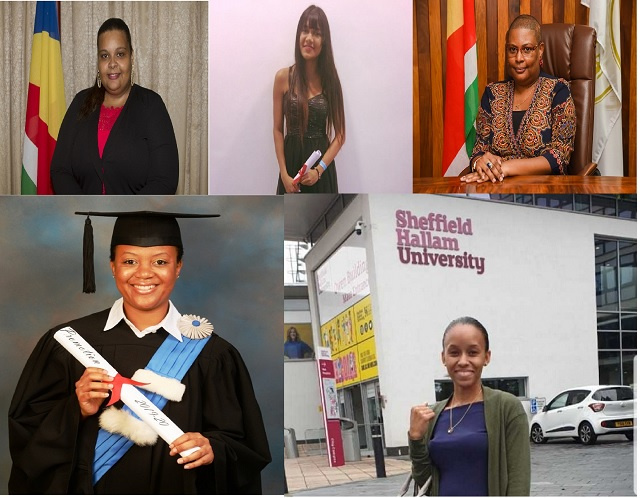 Seychelles, a group of 115 islands in the western Indian Ocean, has made remarkable strides in gender parity and was even ranked among the top 10 gender parity governments in the world in 2018, when five women and five men were appointed as ministers.

In this week's Buzz, SNA presents five Seychellois women who have either excelled in their studies, taken on new roles, or won prestigious awards.

Baro earned a Masters of Science with distinction this year in forensic accounting from Sheffield Hallam University. She was a recipient of the first-ever Central Bank of Seychelles' Guy Morel High Achievement Scholarship,

Baron, who is still doing research on different places of work where she could pursue her career, said would like to share her acquired knowledge with others for more accountability, transparency and better governance in the financial sector.

She said that this will bring more benefits to the country while also help in eliminating financial criminal activities happening in the country.

After coming out top in her class, Baron was awarded the Association of Certified Fraud Examiners Prize.

Eulentin recently graduated from the University of Montreal in Quebec, Canada, where she completed her Master's programme in educational administration with distinction, the first Seychellois to receive such honours at the University.

A teacher by profession, Eulentin said that education was the best choice of her life as teaching is a job that she loves and makes her feel good.

On what she feels is needed to tackle first, Eulentin said training mechanisms with teachers must be set and for real change and the need to put resources in the classes.

Servina is the first woman to be appointed as the chief executive of the Seychelles' Town & Country Planning Authority. She holds a first class degree in geography from the Nelson Mandela Metropolitan University in South Africa.

Servina, who has served as a member of the Planning Authority, said she wishes to bring in fresh ideas and some restructuring where necessary to improve on the Authority's areas of weakness.

Serving in management since 2012 and since 2010 as Secretary to the Board. She has had 11 years of continued service with the Town & Country Planning Authority.

As a young aspiring Seychellois cinematographer, Chetty has done the island nation proud by winning the 'Best Independent Short Film' and also received an 'Honourable Mention Best Director' at the Global Film Festival Awards in Los Angeles in April of 2019 for her short romantic drama 'Desert Rose.' The film is a 15-minute tale of treasure and love that was filmed in Australia in 2018.

In the future, Chetty hopes to film in Seychelles where she wishes to hire local actors and actresses and make documentaries about marine conservation and biodiversity of Seychelles among other great ideas.

The African Banker Awards are designed to recognize the reforms, modernisation, consolidation, integration and expansion of Africa's banking and financial system. The award is based on the achievements of companies, institutions and individuals that contribute to the transformation and development of Africa's financial sector.

Also in 2020, Abel was recognised with the Africa's Woman Leaders Awards, an initiative of the World Women Leadership Congress as part of its engagement to celebrate and recognise women leaders across different regions globally.