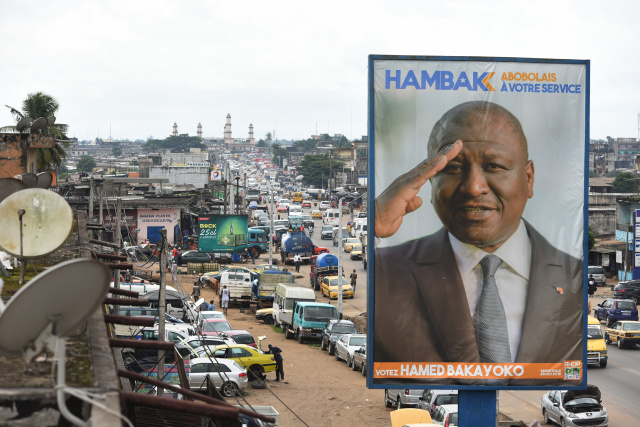 (FILES) In this file photo taken on October 3, 2018 A picture shows a campaign billboard of Ivorian Defence Minister and local elections candidate for Abidjan's Abobo district, Hamed Bakayoko, also known as "Hambak", in the country's southern port city. Ivory Coast's Prime Minister, Hamed Bakayoko, died on March 10, 2021 at the age of 56 in a hospital in Germany, AFP learned from sources close to his entourage.
(Sia KAMBOU / AFP)

(AFP) - Ivory Coast on Thursday mourned the death of prime minister Hamed Bakayoko, a popular leader who reached across the political spectrum as the divided West African country seeks reconciliation.

Bakayoko, popularly known as "Hambak", died in Germany from cancer aged 56, four days after legislative elections that went ahead peacefully and handed victory to the ruling RHDP party.

The calm ballot was an exception in Ivory Coast where recent votes have been marred by violence. The presidential election in October was boycotted by the opposition, and won by President Alassane Ouattara, but clashes left at least 87 people dead.

But for the first time in 10 years, all key political forces decided to participate in the legislative election, in which the opposition won 91 seats against 137 for the RHDP.

Meanwhile the FPI party of former president Laurent Gbagbo said it "bowed respectfully before the memory of this great servant of the state".

Gbagbo felt his loss "like that of a younger brother," it added.

Through his connections, and respect across the political class, analysts said Bakayoko had contributed to appeasement in his country.

"Ivory Coast in mourning", "The Nation weeps", "Ouattara mourns another son" read the headlines in the Ivorian press on Thursday.

At ease in all walks of life, Bakayoko met regularly with religious leaders of all communities and ethnicities, political leaders and young people to urge them to listen to each other and not to resort to violence.

For Massongue Cisse, an office worker, "he was a model for young people and it really pains me a lot".

Ouattara called Bakayoko "my son and close collaborator, torn from us too soon," in a statement read on public television RTI.

Bakayoko took over as prime minister in July last year from Amadou Gon Coulibaly, who died after returning to the Ivory Coast from two months in France where he had been treated for heart problems.

But Bakayoko, who was also the country's defence minister, himself travelled to France for health reasons on February 18 and was later transferred to Germany.

Coulibaly had been chosen to run in the presidential election, but his death prompted Ouattara to stand for election for a third term, a move that triggered a crisis with the opposition.

A source close to the presidency said the dates for Bakayoko's body to be returned, for his funeral and for a period of national mourning would be worked out with his family.

Africa » Be a reporter: Write and send your article » Subscribe for news alert
Tags: ICoast, politics