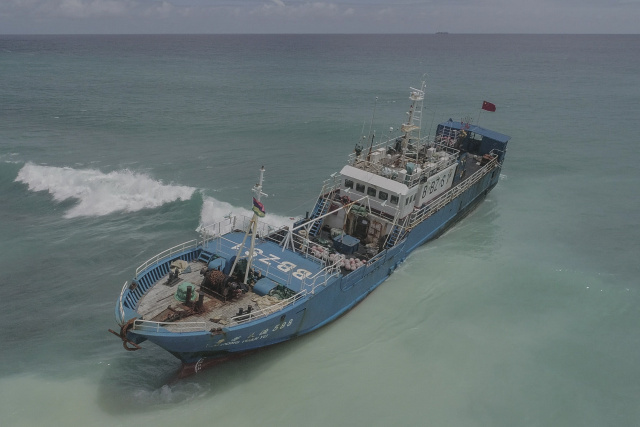 (AFP) - A Chinese-flagged trawler that ran aground off Mauritius with 130 tonnes of fuel aboard has been safely towed to shore, the fisheries minister announced Thursday.

The Lu Rong Yuan Yu struck a reef on Sunday off the northwest coast, rekindling memories of a similar accident last year involving a stranded bulker that leaked 1,000 tonnes of oil into the island's pristine seas.

"The Lu Rong Yuan Yu was towed today to Port Louis harbor. The towing operation started before noon, and went well," he told reporters Thursday, adding no leaks were observed during the operation.

Efforts to remove the 130 tonnes of fuel oil and 5 tonnes of lubricants from the stricken vessel have not finished, he said, but authorities wanted to first get the trawler off the reef and into the harbour.

The crew have been detained for questioning and cannot leave Mauritius until an investigation into the accident is complete, he added.

On July 25, the Japanese-owned bulk carrier MV Wakashio crashed off Mauritius with 4,000 tonnes of fuel aboard but did not begin leaking oil for more than a week.

By the time the government issued an urgent appeal for international help the slick had reached the shore, coating mangroves, corals and other fragile ecosystems.

An army of volunteers scrubbed the coastline but the Wakashio kept leaking. More than 1,000 tonnes of oil eventually spilled into pristine waters.

The disaster was unprecedented for Mauritius, an archipelago of 1.3 million people where many derive their livelihood from tourism and fishing, and tens of thousands marched in protest over the government's handling of the crisis.

A third of global tree species threatened with extinction