Countries should continue AstraZeneca rollout: WHO 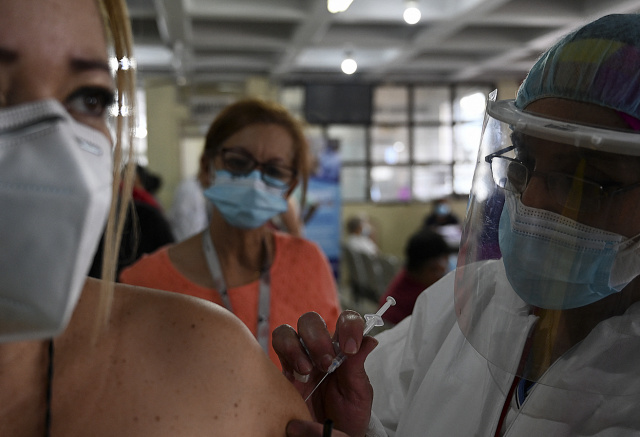 A nurse inoculates a woman with an AstraZeneca vaccine against COVID-19 at the Alonso Suazo healthcare center in Tegucigalpa, on March 15, 2021. Over 48,000 vaccines donated by the Covax mechanism started to be administered Monday in Honduras to employees of the Health Secretariat. (Orlando SIERRA / AFP)

"We do not want people to panic and we would, for the time being, recommend that countries continue vaccinating with AstraZeneca," WHO chief scientist Soumya Swaminathan told a press briefing.

Her comments came as a growing list of mainly European nations suspended use of the vaccine, pointing to cases of blood clots in people who had received the shot.

The WHO said its vaccine safety experts were looking at the data and would meet on Tuesday, while Europe's medicines watchdog will hold a special meeting on Thursday.

"WHO's advisory committee on vaccine safety has been reviewing the available data, is in close contact with the European Medicines Agency, and will meet tomorrow," WHO director general Tedros Adhanom Ghebreyesus told Monday's briefing.

He stressed though that countries' decisions to suspend vaccinations with the AstraZeneca jab -- after blood clots were seen in people who had received doses from two vaccine batches produced in Europe -- were "precautionary".

"This does not necessarily mean that these events are linked to vaccination."

"It is routine practice to investigate them and it shows that the surveillance system works and that effective controls are in place," he said.

Swaminathan highlighted that no causal link had been established between clotting and the vaccine, which was jointly developed with the University of Oxford.

She pointed out that some blood clot incidents among the general population were to be expected.

"So far we do not find an association between these events and the vaccine because the rates at which these events have occurred in the vaccinated group are, in fact, less than what you would expect in the general population at the same time," the chief scientist said.

Mariangela Simao, the WHO's assistant director general for access to medicines and health products, agreed.

She noted that millions of doses of the AstraZeneca vaccine had been administered in Europe, and yet there had been no increase in blood clot events.

"So far it doesn't look like there are more cases than would be expected for the period in the general population," she said.

The fresh suspensions were a major blow to a global immunisation campaign that experts hope will help end a year-long pandemic that has already killed more than 2.6 million people and shredded the global economy.

While halting use of the vaccine as a precautionary measure was understandable, the WHO experts stressed that doing so as case numbers are on the rise across Europe would come at a price.

"The risk-benefit of... vaccinating using AstraZeneca vaccines and other vaccines outweigh the risk of Covid infection," Simao said.

The issue is particularly concerning since the AstraZeneca jab makes up almost all of the doses being distributed in the first wave of the Covax global vaccine-sharing scheme aimed at ensuring access to immunisation for poorer countries.

Simao emphasised though that so far only batches made in Europe were being looked at, "not vaccines that are provided through the Covax facility, which are made in Korea, and India".

General » Be a reporter: Write and send your article » Subscribe for news alert
Tags: health, virus, vaccines, WHO