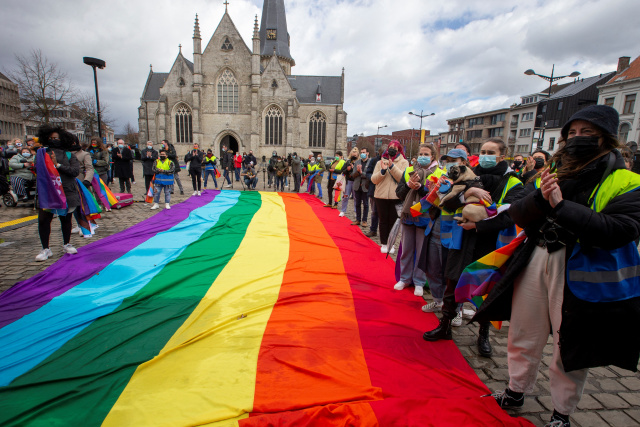 Activists stand by a giant rainbow flag as they attend the campaign "Stand up for LBGTI + Lives", at the Casa Rosa - Rainbow House East Flanders, in Beveren, on March 13, 2021. The Vatican on Monday said the Catholic Church does not have the power to bless same-sex unions despite their "positive elements", saying it was impossible for God to "bless sin". (NICOLAS MAETERLINCK / BELGA / AFP)

(AFP) - The Vatican on Monday said the Catholic Church does not have the power to bless same-sex unions despite their "positive elements", saying it was impossible for God to "bless sin".

The powerful Vatican office responsible for defending church doctrine, The Congregation for the Doctrine of the Faith (CDF), issued a response to the question, "Does the Church have the power to give the blessing to unions of persons of the same sex?"

"Negative," read the CDF's response, signed by Cardinal Luis Ladaria, prefect of the doctrinal office that was first set up in 1542 to hear heresy cases.

Blessings are not allowed, wrote the CDF, because what is to be blessed needs to be "objectively and positively ordered to receive and express grace, according to the designs of God inscribed in creation, and fully revealed by Christ the Lord".

"For this reason, it is not licit to impart a blessing on relationships, or partnerships, even stable, that involve sexual activity outside of marriage (i.e., outside the indissoluble union of a man and a woman open in itself to the transmission of life), as is the case of the unions between persons of the same sex," it wrote.

The CDF wrote that such relationships might have positive elements to be valued, but that did not make them "legitimate objects of an ecclesial blessing, since the positive elements exist within the context of a union not ordered to the creator's plan".

The office wrote that while God "never ceases to bless each of His pilgrim children in this world... he does not and cannot bless sin".

The CDF denied that its declaration was "a form of unjust discrimination". Instead, it said it was a "reminder of the truth of the liturgical rite and of the very nature of the sacramentals, as the Church understands them".

The Church considers that marriage is exclusively the union of a man and woman.

Early in his papacy, Pope Francis took an unprecedented welcoming tone towards the LGBT community, making the now-famous "Who am I to judge?" remark about gay people trying to live a Christian life.

In a documentary released last October, Francis expressed support for same-sex civil unions, although the Vatican later qualified that the comments were highly edited and excluded one saying he was opposed to same-sex marriage.