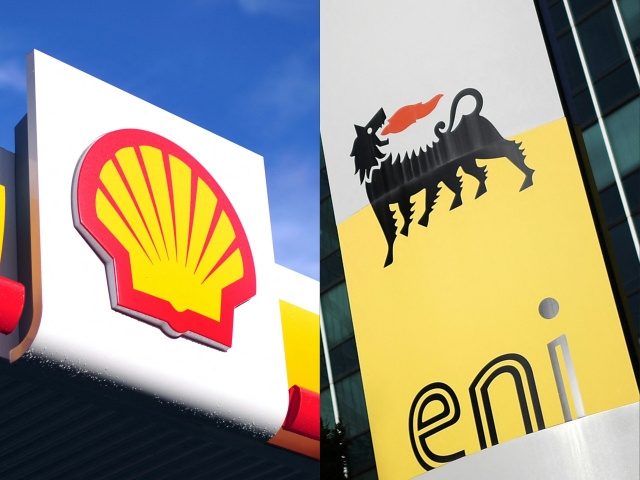 (COMBO) This combination of pictures created on December 20, 2017 shows the logo of a Shell petrol station in central London on January 17, 2014 and the logo of the Italian oil and gas company Eni in San Donato Milanese, near Milan on October 27, 2017. An Italian court on March 17, 2021 cleared oil majors Eni and Shell of corruption charges related to a major deal in Nigeria, according to media and a corruption watchdog.
The case focused on claims that $1.1 billion (920 million euros) in bribes had been paid to secure a giant Nigerian offshore oilfield in 2011.
A Milan court acquitted Eni, Shell and 13 defendants, including Eni's CEO Claudio Descalzi, the ANSA news agency and the Re: Common anti-corruption watchdog said. (CARL COURT, MARCO BERTORELLO / AFP)

"After almost three years of trial, the judgment by the court has finally established that the company, the CEO Claudio Descalzi and the management involved in the proceedings have all behaved in a lawful and correct manner," Eni said in a statement.

In 2011, Eni and Shell paid $1.3 billion dollars for a licence on OPL 245, a giant Nigerian offshore oilfield estimated to hold nine billion barrels of crude.

The money was paid to the Nigerian government, but Italian prosecutors believed that $1.1 billion ended in the pockets of Nigerian politicians and middlemen, including former oil minister Dan Etete.

The minister had personal claims on the oilfield, and prosecutors argued that Eni and Shell knew that most of their money would have been used to pay off Etete and others, but the companies strongly denied this.

Ben van Beurden, chief executive of Royal Dutch Shell, welcomed the ruling, saying: "We have always maintained that the 2011 settlement was legal, designed to resolve a decade-long legal dispute and unlock development of the OPL 245 block."

"At the same time, this has been a difficult learning experience for us. Shell is a company that operates with integrity and we work hard every day to ensure our actions not only follow the letter and spirit of the law, but also live up to society's wider expectations of us."

Earlier this week, Eni said the two energy firms would end up as losers from the OPL 245 deal, since the Nigerian government never gave them production rights to start extracting.

"The benefits never materialised, Eni and Shell invested $2.5 billion and their licence will expire in May. So the truth is that the two companies are the damaged parties in this affair," an Eni spokesman told AFP.

The Italian trial against Eni and Shell started in 2018, five years after three anti-corruption NGOs brought a complaint before the Milan prosecutors office.

One of the NGOs, Global Witness, called the verdict "a disappointment", but insisted that it would "not mark the final word in this scandal for Shell and Eni".

Milan prosecutors can appeal the acquittals.

In their closing statements last year, they had requested an eight-year prison term for Descalzi, as well as for Scaroni, who is now football club AC Milan's chairman.

They also called for a seven-year, four-month term for Malcolm Brinded, Shell's former head of exploration and production, and 10 years for Etete -- who is on the run from justice.

In addition, prosecutors asked the court to fine Eni and Shell 900,000 euros each, and for $1.1 billion, the amount of the alleged bribe, to be confiscated from all defendants.

Global Witness recalled that two middlemen in the OPL 245 deal -- a Nigerian and an Italian -- were tried separately by Italian courts and found guilty in 2018.

The organisation also noted that Shell and Eni's subsidiaries are on trial in Nigeria, and the Netherlands has launched criminal investigations into Shell's role in the deal.

General » Be a reporter: Write and send your article » Subscribe for news alert
Tags: Italy, Nigeria