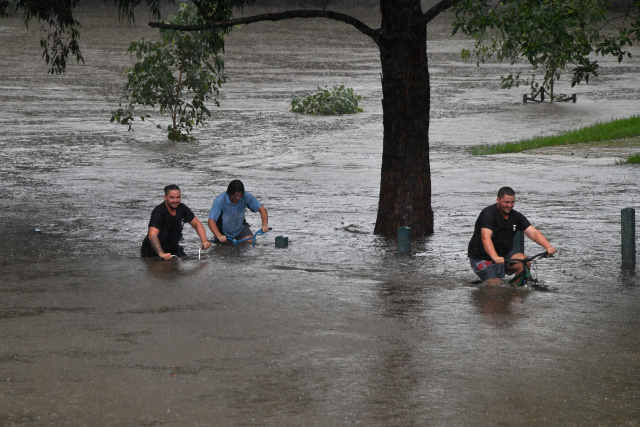 People ride their bicycles through a flooded park on the banks of Nepean river in Penrith suburb on March 21, 2021, as Sydney braced for its worst flooding in decades after record rainfall caused its largest dam to overflow and as deluges prompted mandatory mass evacuation orders along Australia's east coast. (Saeed KHAN / AFP)

Emergency services ordered people living in low-lying areas on the city's north-western fringes to flee to safety, as authorities warned of a potentially "life-threatening" situation in New South Wales state.

It came after the Warragamba Dam, which provides much of the drinking water for Sydney, spilled over Saturday afternoon -- causing officials to warn the downstream Hawkesbury River was expected to peak at levels not seen since 1961.

"It is one of the biggest floods we are likely to see for a very long time," Bureau of Meteorology flood operations manager Justin Robinson said.

Floodwaters had already risen in several areas, prompting mass evacuations, and officials said another 4,000 people could be told to leave their homes in the coming days.

People had already begun flocking to evacuation centres in towns north of Sydney on Saturday as torrential rains pummelled a vast coastal region already soaked by an unusually wet summer.

State Premier Gladys Berejiklian said the region was experiencing a "one in 100 year event" and a national disaster had been declared.

In Taree, where television images showed one house floating down a bloated river, about 150 people slept in a local auditorium overnight that has previously been used a refuge for people fleeing bushfires.

Club Taree chief executive Paul Allen described the floods as a "catastrophe", telling public broadcaster ABC that some locals had "lost everything".

The Bureau of Meteorology said the wild weather was forecast to re-intensify north of Sydney on Monday before easing later in the week.

Conditions were "going to be treacherous yet again," senior climatologist Agata Imielska said.

Rainfall records were forecast to continue tumbling in the coming days, she added.

Emergency services reported receiving more than 7,000 calls for help and carrying out about 650 flood rescues since Thursday, with reinforcements being called in from other states.

The rain and floods were also expected to delay the already halting roll-out of coronavirus vaccines in Sydney and surrounding areas.

Australia is due to begin the first major public phase of vaccine distribution on Monday although the programme has slipped behind the government's announced timetable due to supply and delivery issues.